CrowdSpring
107,000 writers and graphic, web and industrial designers from 195 countries

More than 1 million entries submitted for projects each year

Estimated value of Give Back projects completed: more than $20,000

As the photojournalists' organization In Our Own Backyard made plans to launch AmericanPoverty.org, co-founder Steve Liss knew the project would require an attention-getting logo. Since the nonprofit group had limited financial resources for the photography project, Liss turned to the Give Back program from Chicago-based crowdSpring, an online marketplace that helps companies hire creatives, to get some pro bono assistance.

"About 140 designers submitted logos, and the quality of the work was so strong that it made the final decision very difficult," Liss says. The group ultimately chose a logo from a London-based designer.

Liss estimates AmericanPoverty.org would have spent $2,000 to $3,000 for its logo--money the organization can now use to deliver its anti-poverty presentation to three schools. And the partnership with the winning designer, Alice Ralph, continues: She created stationery and T-shirt designs for AmericanPoverty.org and adapted the logo in various resolutions and formats for a variety of print and online uses.

Liss believes the logo's strength has helped the project's visibility. "Whatever disagreements people may have with our organization," he says, "they agree that we have a good logo."

So far, crowdSpring's program has helped a dozen nonprofits, including literacy and environmental organizations and a group for fathers of autistic children. Give Back sprang from a discussion on the site's forums. 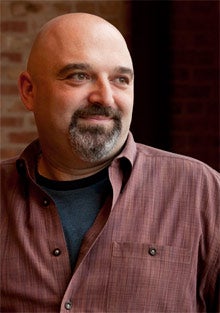 The premise is simple: A registered 501(c)(3) nonprofit (or its equivalent in other countries) contacts crowdSpring for help with creative work, such as copywriting, website development or graphic design. CrowdSpring co-founder Ross Kimbarovsky helps vet the charities; he then writes a brief summarizing the organization's needs, mission, audience and other project details and posts it on the site. Volunteers from crowdSpring's community of more than 107,000 designers and writers submit their best efforts, agreeing to waive their fees if their submissions are chosen.

CrowdSpring also waives its fees, which typically run $39 to $199 for a paid project, plus a 15 percent commission.

Before launching Give Back, Kimbarovsky was concerned that there wouldn't be enough people raising their hands for the pro bono jobs. With thousands of paying gigs available on the site--and fees ranging from hundreds to thousands of dollars--he didn't think members would want to work for free. But the crowdSpring crowd has proved him wrong: Each Give Back project has attracted 30 to 100 applicants.