How Signal Stands Out in the Crowded Text-Message Marketing Space 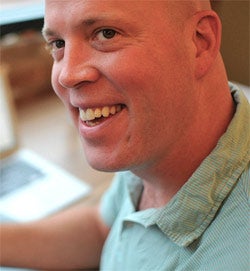 It's hard to stay focused in the digital world, but Signal founders Jeff Judge and Chris Watland have turned their SMS-marketing startup into a web success story by emphasizing the fundamentals. The duo got in on the ground floor of the exploding text-marketing industry, building an easy-to-use platform for firms managing SMS campaigns. Today Signal has evolved into a cross-channel marketing platform for managing text campaigns, e-mail marketing, social media and even coupons and sweepstakes from a single cloud-based account.

And they did it without a dime from outside investors.

The Chicago-based company pulls in $2.7 million in annual revenue and has run more than 200,000 campaigns for more than 1,000 clients, including Redbox and Sears, since its launch in 2006. And Signal remains lean, running a 15-person office.

From Real Estate to SMS
Watland and Judge met back in '06. Watland had been working in public accounting for PricewaterhouseCoopers, and Judge started out as a management consultant before a stint at web travel firm Orbitz, where he worked his way up from software engineer to director of technology. Both had ambitions for making it on their own, and they struck up a friendship pitching business ideas back and forth.

Watland and Judge were intrigued by the text alerts some local bars were sending about drink specials. Their curiosity led to what they saw as an opening in the mobile-marketing space, which was just beginning to take off. "There was no self-service text messaging where a business could come out and get going right away," Judge says.

Within a month of hatching the idea, the two were working on the new concept full-time. Judge was putting his software skills to use building a basic SMS-messaging platform, while Watland hit the pavement to gather intelligence on potential customers and what they wanted from a text-messaging service.

Their goal: Build a one-stop shop to manage and track digital campaigns. Judge estimates there were already about 200 SMS-marketing firms in the space, but no clear leader and very few offering the kind of simplicity firms were seeking.

"The industry, at least in terms of text marketing, was a lot of garbage content. Pay-to-vote, pay for wallpaper or ringtones. We started to get calls from people who said, 'If you could only pair this with e-mail,'" Judge says. "All the signs started to point to building a central platform."

Going it Alone
Watland and Judge put up $35,000 apiece from personal savings and secured $100,000 in operating credit, which they've since repaid. They decided very early in the process not to go after outside investments, feeling stymied by the venture capital Kabuki dance.

So Watland and Judge decided to focus on collecting customers instead of investors. Their first customers came from an old-fashioned referral from the business next door, followed by a few more local Chicago companies. Then more clients started to come in from AdWords, shoe-leather networking and social media.

In a lot of ways, Watland says, their timing was dead on. Some of Signal's first customers were skeptical about text marketing, but the idea wasn't completely alien, with shows like American Idol popularizing text campaigns. "I think we latched onto this pretty quickly: You want to be new and innovative, but you don't want to be too new [that] people aren't familiar with it," he says.

The do-it-yourself funding approach gave the business an edge it might have been missing with a fat bank account. "We've been scrappy and lean since day one," Judge says. "We think bootstrapping is important. It's a hell of a lot harder, but it forces you to really think through your decisions, take quick action and learn from mistakes. It's different when you have to focus on where money comes from rather than having a big cushion in the bank."

That's not to say living on the edge inspired flawless business thinking. A brief foray into building mobile smartphone apps for clients almost proved costly. "Logically it made sense at the time. Anyone can build an app, but it's a one-time enterprise, unlike our core product, text messaging, which is continuous," Watland says, noting that the experience reemphasized the value of sticking to their priorities. "It's about focusing on the core and shutting down other things that aren't core to the business."

SMS for Everyone
For now, the focus at Signal is on continuing to refine its central service: a cross-channel marketing platform.

And while the company has so far worked mainly with larger firms, it recently debuted a freemium model for small businesses.

Matt Kubinski is the director of promotions and marketing for Lodge Management, one of Signal's earliest customers. Lodge, which manages 12 bars in the downtown Chicago area, uses the service to push promotions such as waiving cover charges for text subscribers.

"It's a very large part of what we do," Kubinski says. "We do a vocals competition at one of the bars--a grandiose karaoke contest that we kind of set up in the style of American Idol--and people vote by texting on their phones. It's a unique, fun way to get people involved." 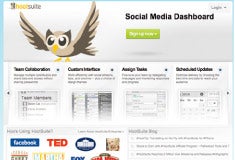 HootSuite
HootSuite lets users manage multiple networks, schedule messages, develop custom analytics reports and more. HootSuite is free, but certain features, including reports, work on a points system. Users must upgrade from a free account to have access to all the site's features. 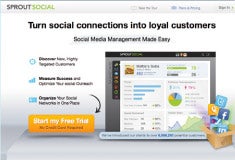 Sprout Social
With Sprout Social, users can organize multiple accounts and multiple identities in one place, schedule messages and measure success through reports. The interface is among the sharpest around. Sprout Social also has some cool tools for discovering new people to follow and engage. Packages range from $9 per month to $899 per month. 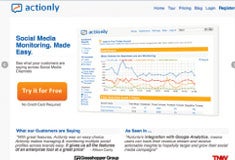 Actionly
Actionly is a paid social media monitoring tool that gives users the ability to create custom searches from which to pull data, track ROI and measure post-click conversations. It also facilitates the management of multiple social media accounts from its dashboard. Best of all, Actionly integrates with Google Analytics. Plans are $50, $100 and $400 per month. 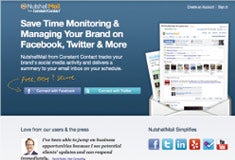 NutshellMail
NutshellMail from Constant Contact tracks users' social media presence on a number of sites, including Facebook, Twitter, LinkedIn, Yelp, foursquare and YouTube, and delivers a summary via e-mail. The tool is free, and therefore great for managing brands on a budget. --Mallory Woodrow