One in 10 Americans practice yoga, according to the Yoga Business Academy.

The program stemmed from Carbone's own community service requirement. No, she didn't do time: Torrance, Calif.-based YogaFit, the school from which Carbone received training as an instructor, requires students to donate eight hours of free instruction to those in need. 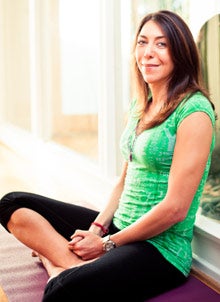 When YogaFit founder Beth Shaw instituted the community service requirement in 1997, she didn't know it would inspire dozens of ongoing service-based yoga programs around the country. YogaFit is the largest yoga instructor training school in the world, and its graduates are working with prisoners, battered women, homeless populations and people in impoverished nations, largely inspired by their certification requirement.

YogaFit-trained instructor Jannell MacAulay, an active-duty officer at Maxwell Air Force Base in Montgomery, Ala., used her volunteer hours to teach yoga to military members. What started in March 2011 as a lunchtime class with five participants is now Healthy Body Healthy Life, a free program with 100 active members that offers fitness and nutrition lessons, supervised workouts and a blog. Five women are currently undergoing YogaFit training to help her expand the program; ultimately, MacAulay would like to see it available "on every military base."

Founder Shaw is proud of, but not surprised by, the fact that these programs have taken on lives of their own. She says the commitment to giving back is at the core of the karma yoga her program teaches. Shaw even donated the instruction manuals that Ascend uses.

Carbone says YogaFit's assistance was instrumental in helping her fledgling operation make a big difference. While Ascend is new, initial outcomes are promising, with just 25 percent of the 30 program graduates returning to jail, vs. California's average of 70 percent. A graduate who had previously served six years in prison for assault with a deadly weapon now has steady work at a water-treatment facility and is attending college.

"Most [people] can do better if they're taught to think the right way," Carbone says. "Yoga is a big part of that."