The Startup Success Story Behind the Band of the Day App

By Jennifer Wang June 14, 2012
This story appears in the June 2012 issue of Entrepreneur. Subscribe »

Like all independent artists, rock musician K Ishibashi--who goes by the name Kishi Bashi as a solo performer--was eager to boost his profile. At the end of last year, he agreed to be featured on Band of the Day, a new music-discovery app that each day showcases one act, with full-length song streams, photos, original interviews and biographies, all on a slick calendar interface. For two weeks after Kishi Bashi was featured in December, there was a spike in new fans on his Facebook page and Twitter feed. 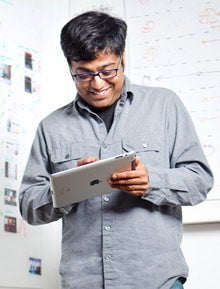 "It was a strong promotion that definitely helped grow awareness for my music," Ishibashi says, noting that a producer reached out to him because of it. Since then, he has secured the money he needed to release an album and has landed a gig touring with popular music acts Of Montreal and The Barr Brothers. "If you gain a handful of fans from Band of the Day and then another handful of fans from blog postings, before you know it, you have a legitimate following on the internet," he says.