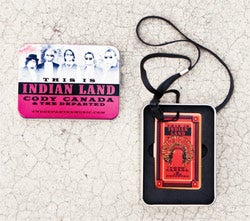 Gigmark's product isn't a sexy smartphone app or the next hot social network. Rather, these guys have staked their claim to tech riches on the seemingly mundane USB flash drive--the trusty, but staid, file-storage device that plugs into just about any computer.

Though most techies would call the flash drive a thing of the past, Balchunas begs to differ. "People are saying the flash drive is dead. The flash drive isn't dead," he says. "Millions of these devices are still being sold and used. What we're doing is taking it to the next level."

Flash Drive in Overdrive
So, perhaps it lacks street cred, but the founders' patent-pending Interactive Flash Drive has really caught on. Since Gigmark launched in 2008, orders for its drives have climbed steadily; total sales topped $10 million in 2011.

The company's success stems from making the old flash drive smart by connecting it to an online content management and analytics reporting system. This two-way internet chatter allows businesses to update content no matter where the drive is or who is using it.

Thus, the flash drive is transformed into an intelligent interactive marketing platform that produces real analytics. Also, because the original information always resides on a portable drive, the content is available whether the user is online or not.

Dura-Line, a Knoxville-based company that manufactures plastic pipes used to protect fiber-optic and electrical cables, ordered about 7,500 of Gigmark's drives. The company wanted to replace its voluminous paper catalogs but still put a physical, branded product featuring the company logo in clients' hands. The flash drives are designed to look like the company's multicolored piping. Dura-Line customers can order directly from the flash drive and build and customize orders through an app, also on the drive.

"We have a way of getting the latest information about our products to our customers in seconds at no real additional cost," says Tim Grimsley, vice president of sales and marketing for Dura-Line.

Gigmark touts a web-enabled concept, but Balchunas believes it works because it gives customers something they can hold. "We wanted to have a tangible, deliverable product," he says. "It can be branded. It can be manufactured to look like anything, so it can deliver a marketing concept."

The Inspiration
Despite Gigmark's corporate focus, the original idea spun out of the music industry. Balchunas was a representative for Aderra, a Los Angeles-based company that records live concerts and distributes USBs loaded with the material to the audience. He shared the idea with friend Judson Ahrens, who co-founded a promotional marketing company with Frost in Knoxville. Ahrens saw a tie-in with the idea for his and Frost's fledgling company and asked Balchunas if he could set up a conference call with the president of Aderra.

That call never happened. Just days before it was set to take place, Ahrens was killed in a car accident. About a month later, Balchunas reached out to Frost. "I told him, 'Let's keep this thing going even though Jud is gone. He'd want us to continue,'" Balchunas says.

Frost and Balchunas did eventually meet with the owner of Aderra. Later, the two started kicking around the concept of an interactive flash drive. "We came up with this idea that it would be great if, after you sold the USB drive to a customer, you could stay in touch with them and keep that connection going between the fan and the artist," Balchunas says.

A Partnership in USB
To realize their vision, Frost turned to Digital Media Graphix, a Knoxville-based software and web development firm. He found an eager collaborator in president Wade Austin, whose company had already developed semi-interactive DVDs and web browser applications. But to Austin's knowledge, nobody had ever combined the concept with removable media like a flash drive.

"They were asking, 'How can we combine these technologies to provide this service?'" says Austin, now creative director at Gigmark. "They brought that to us, and at first glance I said, 'I think this is absolutely brilliant.'"

It would be the beginning of a winning partnership. Balchunas and Frost brought the cash, strategic vision and boardroom acumen, while Austin and his team brought the design smarts. Today Gigmark owns a part of Digital Media Graphix, and the two companies share an office.

It's been the kind of marriage that doesn't always happen in the tech world: Both sides recognize and respect each other's strengths. Balchunas and Frost show an easy grasp of the main technical concepts and an ability to explain them to the uninitiated.

"We're not tech guys," Frost says, "but I've always felt that if you're a good salesman, you should be able to sell anything."