How 'Going Green' Can Save You Money 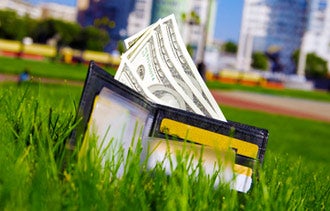 When it comes to sustainability, I'm on a mission to shift the conversation from the nebulous concept of "going green" to the more definitive one of "choosing quality." The primary outcome is the same--less trash in landfills--but my methods will also save you money. Here are my four key guidelines.

Buy the best you can afford. I used to believe I was being frugal by purchasing a new $3 pair of gardening gloves each March. When they fell apart in the fall, I would simply throw them away. Then one year I splurged and bought a $15 pair of gloves. I haven't bought another since.

Lesson learned: Quality items have a higher initial cost, but the total cost of ownership (and impact on the environment) is often much lower than it would be for a cheaply made equivalent.

Refurbish and reuse the things you own. My grandmother used to say, "Use it up or wear it out, make do or do without." In other words, get more value from the things you already have by making incremental payments to extend their life. A guy I know drives a 17-year-old truck that seems to need a major repair each year. When I asked why he doesn't get another truck, he told me he spends a little over $1,300 a year to keep the current one running well, and that's a lot less than the $20,000 over four years he would spend on payments for a new one.

You can apply the same principle to almost anything you own. The more life you can squeeze out of your possessions--from a razor blade to a car--the more money you will save in the long run.

Embrace imperfection. We've become used to buying perfect-looking things: food, tools, clothing. But that perfection comes at a price, both financially and environmentally. High-quality, handcrafted goods may contain small flaws. Organically grown fruits and vegetables often have blemishes. Used equipment purchased via Craigslist or on eBay sometimes needs to be cleaned up. This may be off-putting at first, but when you register the environmental, economic and quality benefits of goods with small production runs or that are sustainably grown or recycled, you'll find yourself wondering why such flaws ever bothered you.

Recycle, then replace. This is a little trick I use to stop myself from making impulse purchases. If I'm itching to buy, for example, a new and improved flat-screen TV, I won't do it until I've sold or given away the old one. This method also works for clothes and sports equipment. Typically, the exercise forces me to consider whether I really need to replace my things. (Usually, the ones I already have are just fine.) It also eliminates the temptation to simply throw away old items once I've bought something new.

These tips can be tough to follow--I've been working on some of them for years--but because I'm trying to do my part for the environment and can see a positive effect on my bottom line, I'm willing to keep trying. You should, too.