How One Entrepreneur Turned Restaurant Waste into a Business

Danger is not Charles Anderson's middle name. That became clear one night behind a catfish-fry house in Mount Home, Ark., when the eatery's owner pulled a gun on him. "He was going to get me for stealing his oil," says Anderson, founder of Golden Fuel Systems, which makes straight vegetable oil (SVO) conversion kits for diesel vehicles.

Anderson had spotted a bin full of used oil as he drove past the restaurant in his '94 Ford truck. Rather than ask for permission to pump the waste into his gas tank, he just pulled over and started fueling up. A few minutes later, while staring down the barrel of a gun, he had some explaining to do. Apologies convinced the owner to hold his fire. And after describing his truck's grease-powered fuel system, Anderson not only got permission to haul away vegetable oil whenever he was in town--he also scored a free dinner.

Born to a family of fishermen, ranchers and land surveyors in Homer, Alaska, where he still lives, Anderson was mostly home-schooled and never went to college. His family's frontier lifestyle taught him self-reliance. When a tractor or boat broke, he repaired it with whatever materials were on hand. Those experiences, along with some diesel-engine tinkering with his grandfather, molded Anderson into an innovator. After learning about biodiesel, or chemically modified vegetable oil, he engineered his own way to bypass the additives to pour cooking waste right into his fuel tank.

Anderson converted his first car, a Toyota diesel pickup truck, to SVO in early 2001. At the time there wasn't much information readily available about the process, so a company that provided a filter for Anderson's system started routing customer calls to him. 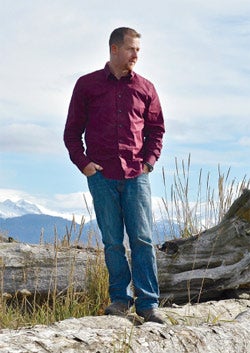 "I had people calling out of the blue to pay me for my knowledge," Anderson says. That gassed up his idea to launch Golden Fuel Systems.

Today the company has products that can convert six brands of diesel cars--as well as generators, boats, semi-trucks, buses and RVs--to SVO. Depending on the vehicle, the cost is about $3,000 per kit. The company has sold approximately 6,500 units.

Anderson says business noticeably fluctuates along with the price of gas, noting, "I can really track sales and inquiries to the spike in fuel costs." But Golden Fuel's long-term potential is bright, as Anderson's business is able to scale quickly when gas prices peak. Part of that is due to partnerships with installers in Ohio, Texas, Florida and New York, as well as Norway and Japan. Order fulfillment and shipping are handled from a facility in Springfield, Mo.

Anderson also found a way to mix oil and water by using SVO for his other business, Sail Homer, an eco-friendly boat touring company that takes visitors around Alaska's Kachemak Bay. And each spring and fall, Anderson hops in his SVO-powered RV to help customers based in the "lower 48" states convert their own vehicles.

However, since that Arkansas gun incident, Anderson makes sure to ask before siphoning SVO from restaurants. "You always get much better results," he says. "I've actually gotten free food four or five different times." Besides, playing it safe better fits his company's image, and his real middle name: They're both Golden.