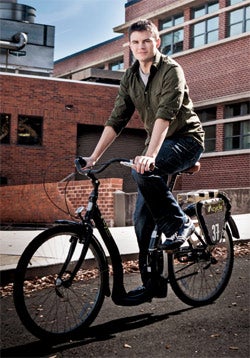 From D.C. to Minneapolis to Montreal, there are at least 15 self-service municipal bike-sharing operations in North America. Anyone can use them to rent a bike from a kiosk and drop it off at another one.

It's a great idea, to be sure. But are these services profitable? "Probably not," says Robbie Webber, senior associate at State Smart Transportation Initiative in Madison, Wis. Could they be? "Absolutely," she says. "It's just that it's such a new concept in the United States, and one that's very expensive to start up."

The high cost of entry struck Kyle Azevedo and three classmates at Atlanta's Georgia Tech University as an opportunity. "When we looked at the options for implementing a program in Atlanta," he says, "they were completely ridiculous--$5,000 per bike, with permanent stations that had to be trucked to each location and installed. Getting funding and all the right permits would have been a nightmare. Being mechanical engineers, we thought there had to be a better way, and we set out to design the world's first GPS-enabled, stationless bike-share system."

Azevedo is now CEO of the resulting company, viaCycle. "Once we started, we realized that cities and campuses around the world were overpaying for clunky systems that were expensive to set up and maintain," he says.

Azevedo and his team spent 2010 sourcing equipment and perfecting a mobile app; in 2011 they cranked out their first bikes on the Georgia Tech campus. He says the advantage viaCycle gives customers is convenience: no kiosks or docking stations, no fussy returns. Bikes are kept at standard bike racks, locked with viaCycle's proprietary security chain mechanism.

When registered customers need wheels, the app points them to the closest bike, which they unlock through the app. Once riders reach their destination, they lock the rig to any bike rack. Pricing varies by program; at Georgia Tech, rentals cost 45 cents for 30 minutes or $18 for 24 hours. According to viaCycle, the cost to launch the program is one-third as much as kiosk-based sharing systems. The locking technology can be retrofitted to most bikes.

Because it's portable, the viaCycle system is inherently scalable; the business can travel to areas of demand--such as campuses, sponsored events, conventions or resorts--without incurring the costs and permits associated with setting up shop in each location.

Azevedo claims viaCycle has seen growth of more than 30 percent per month in terms of the number of riders using the 40 bikes at Georgia Tech and the 20 that have been placed at George Mason University outside Washington, D.C. The company broke even by the end of 2012 and has plans to expand its fleet this year to 500 bikes in locations such as Google's campus in Mountain View, Calif., and San Francisco's SoMa district.

Azevedo's team is also pursuing sponsorship and advertising deals based on the data gathered by viaCycle's bikes. "All of our bikes generate real-time GPS data, which we aggregate and analyze," he says. "With that information, we can work with retailers to run location-based promotions."