Six feet tall with the proportions of an action figure, Dave Dahl has arms thicker than most people's legs, a snowplow of a jaw, long hair and a chest that looks overstuffed with pride. As he swaggers through the bakery of his Milwaukie, Ore.-based company, Dave's Killer Bread, it's easy to imagine him walking around a prison courtyard--a circuit Dahl has walked many times.

A self-described "four-time loser," Dahl spent more than 15 years in prison, on charges ranging from armed robbery to dealing methamphetamine. In 1997 alone, he was arrested five times in three different counties. During his last prison stint, Dahl became suicidal. "I was ready," he admits. "It was over for me."

Dahl was treated for depression, and after an early release from prison in 2004 decided to rejoin the family business. He started working for his brother, Glenn, at the bakery their father founded in 1955. 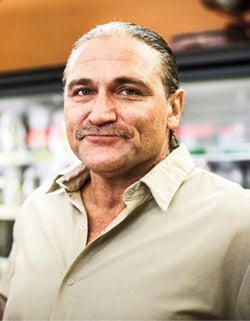 Dahl began tweaking his father's old recipes, and in 2005 he, his brother and Glenn's son, Shobi, launched Dave's Killer Bread, selling their wares at farmers markets. Now the company has a work force of more than 280 people. Last year Dave's sold $54 million worth of organic, GMO-free products (the tagline: "Just say no to bread on drugs") to 2,200 stores in the western U.S. and Guam, including the Safeway and Vons chains, as well as to institutional clients.

While the seed-heavy, whole-grain products get the most credit for the company's rise, an open-minded hiring policy toward former convicts also contributes to its success. Like the boss, 30 percent of the staff is familiar with life "inside." A willingness to take advantage of programs during and after imprisonment is among the characteristics the company seeks when hiring ex-cons.

"You're basically looking for someone who has learned accountability and principles of change and growth," Dahl says. "You want to see somebody who can show a track record of positive change." Dahl contends that his customers "buy the bread because they like it, because they want it. But it makes them feel good to eat something that is made with the right kind of heart."

Erron Herndon, who is part of a supervisory team that oversees all 400,000 loaves that get wrapped, sliced and shipped from the bakery each week, is a prime example of the type of employee Dahl looks to hire. Herndon--whose past has included "drugs, guns, fighting and kicking doors in"--earned a psychology degree while incarcerated. After his release he attended an Oregon community program called Bridges to Change that helps integrate former inmates back into society.

"I've gone through this whole system realizing that I need to make a difference in my life for my family," Herndon says of his career path. "I found something that I started believing in, and then I started living for it."

Every hire at Dave's, regardless of background, begins with a 90-day probation period. At times, things go wrong (though the company says turnover is standard compared to similar industries). Occasionally the company hires people who aren't ready to settle into steady work; other times it has hired too many former felons at once. But Dahl believes the rewards far outweigh the risks. "When you lose a bad person, you gain a good one," he says. "And then the effect they have on the community and their family--that's exponential."

As he walks around the bakery, Dahl fist-bumps a worker wheeling racks of hot bread from the oven to the cooling tower. Across the bakery, a woman bagging loaves waves to the boss. Both have done time, he says, but now they wear smiles instead of prison garb.

"There's a general pride to working here," Dahl says with a slight grin. "They're happy about it, and they like what they're doing. That's the fellowship that they have."