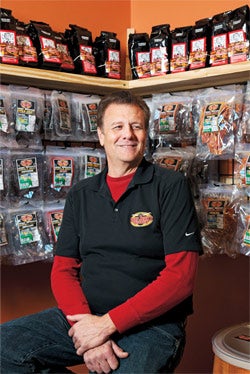 Not too long ago, the dried meat known as jerky was best left to road-trippers, survivalists and the inebriated. But in the last decade, as everything from moonshine to salt has undergone an artisanal makeover, jerky has elevated its culinary status as well. Some of the best can be found at The Beef Jerky Outlet, a 13-unit franchise based in Seymour, Tenn., that sells small-batch jerky, hot sauces, jams, pickles, summer sausage, smoked cheeses and popcorn.

"We have over 200 varieties of jerky, including alligator, kangaroo, pheasant, duck, chicken, salmon, elk and venison," says vice president Paul Lyons. "If it can be turned into jerky, we have it."

In addition to its locations in Tennessee, the franchise operates stores in Texas, Michigan, North Carolina, Louisiana and Virginia, and hopes to add 10 to 15 new outlets this year. We sat down to chew the fat with Lyons and president Scott Parker.

How did The Beef Jerky Outlet get its start?
Lyons: The original concept came about 15 years ago and was started by a meat supplier. They set up independent Jerky Outlets, but they never did anything with the concept and never got their act together. They aren't around anymore. About three years ago, some of us independent owners thought there was something more to be done with the concept, so we pursued the idea and began franchising in 2010.

Essentially we merged those independent stores under a trademarked name and opened new franchises.

What has driven the growth of jerky in the last decade?
Parker: Part of it was the low-carb craze and health concerns. Ninety-nine percent of the jerky we carry has no MSG and no sodium nitrate. It's all U.S. beef and natural tasting. Customers order it in bulk from our website.

Lyons: There's been a huge growth in jerky, period. I think that Jack Link's, which is found in convenience stores and gas stations, has gotten the public to encounter the product, to get a taste for it. But it's a mass-market product and is what we consider at the lower end. It gets people off the ground with jerky; then they see a place like ours and are willing to try something better.

Why is jerky so expensive?
Lyons: If you start with 400 pounds of meat, you're only going to end up with 165 to 185 pounds of jerky. The price of beef has definitely been going up with corn prices and gas prices. We try to keep our prices low. We only sell quarter-, half- and 1-pound packages. Convenience stores usually sell about 3 ounces, so we're pretty competitive in price. That's the outlet idea--if you buy in quantity, you get a better deal.

What's the most unusual Jerky you carry?
Parker: We have one that is moonshine-flavor. It's got a smoky, corn-whiskey taste. But the one we're getting ready to release in the spring is pretty unique. It's made with Louisiana crawfish-boil spice, then sprinkled with Slap Ya Mama Cajun spice. It's got a pretty good one-two punch.