How International Franchisors Are Making a Name for Themselves in the U.S.

Justin Gibson was in Germany finishing up a study-abroad program in 2006 when he decided to do a little gift shopping. The Ph.D. candidate in economics was wandering around the west-central town of Giessen when he found himself in his dream gourmet store, stocked with glass balloons of specialty liqueurs; oak casks of aged Scotch; stoneware crocks of artisanal fruit-wine and balsamic vinegars; and olive and nut oils. Best of all, the employees urged him to sample everything.

"The guy inside the store kept asking me to try one of the vinegars, and I kept turning him down," Gibson says. "But then I tried it. That taste of vinegar changed my life--I couldn't imagine vinegar could taste like that." It was a one-of-a-kind retail experience, he thought--until he saw the pile of franchising brochures. It turned out he was in a Vom Fass ("from the cask" in German), one of the country's largest franchises, with more than 170 locations in Germany, Austria and Switzerland.

When he got home to Madison, Wis., Gibson handed his father, David, a Vom Fass pamphlet and said, "This is what we're doing." The elder Gibson, who had recently retired, agreed, and with money from his 401(k), the two bought the rights to franchise Vom Fass in the U.S. 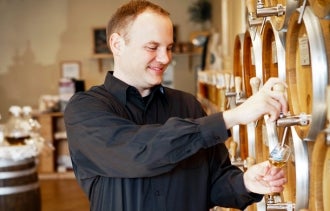 Many people view franchising as a uniquely American practice--with McDonald's, KFC and Subway seen as the ambassadors of American culture. While the goal for many domestic franchises is to build a base in the U.S. and eventually expand across the globe, it turns out the holy grail for international franchises is the U.S. market. And in the last few years, as franchising has matured elsewhere, many strong concepts are making it to America. Yogurt franchise Red Mango, for instance, is an import from South Korea. Sixt, one of the largest car-rental agencies in Europe, has opened nine U.S. units. And Cartridge World, with 650 locations in North America, originated in Australia.

"It's a complete juxtaposition to where international franchising was 20 years ago, when it was in its infancy," says Ray Hays, senior director at Irvine, Calif.-based business consultants Edwards Global Services. "Ten years ago, you would have seen significant domination by U.S. franchise companies in the international market. But there were a lot of missteps, and in many cases those concepts ended up terminating their international divisions. That left a void that homegrown franchisors could fill. And now many of those well-funded international franchisors are ripe to enter the U.S."

Of course, that's easier said than done. International franchisors can go the route of Vom Fass and turn their expansion over to a master franchisee in the U.S. In another case, that of Aussie Pet Mobile, which originated Down Under, the franchise moved its headquarters to the U.S. to conquer the pet-grooming niche here.

"A foreign franchisor looks at the U.S. market like mecca," says Aussie Pet Mobile founder Ian Moses. "It's one thing to be successful in a country with 20 million people. But it stands to reason [you'd want] to bring the concept to America, with 300 million people who have the same aspirations and same love for their pets. And it's a fairly easy transition, since there are no language problems and no real cultural barriers."

Since its arrival in 1999, Aussie Pet Mobile has launched 70 U.S. franchises that operate 200 pet-grooming vans.

The company is now based in Aliso Viejo, Calif., having sold its Australian operations to a licensee.

But the transition wasn't without hiccups. At first, the "pet mobile" was a trailer pulled behind a truck--an ideal setup for a warm locale like Australia, but no easy task when facing a blizzard in Boston. So Moses redesigned the concept, putting the mobile grooming studio inside a van.

Vom Fass had similar problems translating its concept to the U.S., mainly due to nebulous laws regarding alcohol sales. Prior to the launch stateside, the company learned it would be unable to sell whiskey and liqueurs from the cask--a practice that represents about 30 percent of its European business--because it's illegal to bottle alcohol in a retail location. It took nearly two years to clarify the rules; the Gibsons ultimately worked out a deal with a local distillery, Madison's Yahara Bay, to bottle the company's products.

In Europe, a Vom Fass outlet can be placed in as little as 500 square feet. Knowing that U.S. consumers prefer roomier shopping, the Gibsons developed their stores at 800 to 1,500 square feet. But the biggest difference is that the U.S. division is launching a sister concept, Crescendo, which will swap a spice shop for the alcohol part of the store. Crescendo will fit in smaller markets, while Vom Fass will go into larger, destination markets.

Vom Fass, the younger Gibson explains, is "a concept spawned out of Germany to make a more healthy brand.

Alcohol laws worldwide can be convoluted and difficult, and in many communities alcohol can't be associated with health. Crescendo will be more of a Mediterranean concept, focused on making great food that's good for you. It will be our defining concept in the U.S. market."

Tough Sells
The hardest sell for foreign franchises in the U.S. might be the restaurant sector. While tastes have evolved in the last few decades, American palates are still not as adventurous as many would like to think.

Yoshinoya--the gyudon, or "beef bowl," chain--was founded in 1899 in Japan as one of the world's first fast-food companies. In 1979, Yoshinoya, which has 1,800 units worldwide, decided to try its hand in the U.S., mainly in Southern California. In 2008, the company decided to start franchising; it now has 22 franchised units and 72 company stores in the States.

But Japanese tastes are not always compatible with those of Americans. That's why subsidiary Yoshinoya America has the freedom to tweak flavor profiles and operations to fit the U.S. consumer. In fact, in May 2012 it launched a sister concept, Asiana Grill Yoshinoya, a fast-casual restaurant that lets customers create their own rice and noodle bowls. "Our parent company gave approval, but this is definitely a Yoshinoya USA project," says Lea Rodriguez, vice president of marketing for Yoshinoya America. "We're constantly looking at our industry and want to adapt and bring in new market share. Asiana Grill is geared for a different demographic than Yoshinoya."

But translating concepts for the U.S. market is a small concern compared to the legal requirements of entering the States. "The No. 1 barrier to entry is the franchise regulations," explains Edwards Global Services' Hays. "We have one of the strictest, if not the strictest franchise disclosure process in the world. That translates into expense--getting attorneys, preparing FDD documents. It can cost hundreds of thousands of dollars."

Moses of Aussie Pet Mobile faced these challenges. "One of the best pieces of advice I can give to any franchisor is to surround yourself with very, very competent professionals," he says. "I was lucky to have a good franchise attorney. You have to pay to engage professionals who have been doing this for 20 or 25 years. It may cost more, but it's going to pay off so much for you to get the regulatory thing under control and get you off and running."

Hays expects lawyers to be busy in the coming years. "It's [only] a matter of time before foreign franchises, and especially European franchises, begin to eye the U.S.," he says. "Successful European franchisors are running out of markets, and there's no way they can't not look at the U.S. They have the financial firepower, and if they get the paperwork in place and a pilot off the ground, they stand a good chance of competing with U.S. franchisors."

And then there's simply the cachet that comes with conquering a megamarket. "The world views America as the franchising capital of the world," Moses says. "It goes back to McDonald's, etc.--that's where franchising started. Everyone around the world has the ultimate goal of having a successful system in America."

Don't Get Lost In Translation
When David Gibson of Vom Fass began franchising the German company in the U.S., it took a while to figure out the logistics of working with a foreign head office. Here's what he has to say about dealing with a boss abroad.

Language: "This has been a constant challenge," Gibson says. In preparation for increased international growth, Vom Fass International hired a multilingual COO with extensive international business experience. "This was instrumental in paving the way for our initial discussions--right down to today, when we have 'nuanced' talks about business issues."

Time zones: "Most important e-mails and files have to be sent by late evening in order to ensure they will greet the Germans when they arrive to work. Equally important, we have to be up early to ensure we have time to discuss important issues before they go home for the day."

Culture: Both sides were conscious of cultural differences from the outset. "We have adopted some of their practices, and they've adopted some of ours. One particularly striking difference is the formality of communication. The Germans are much more formal and explicit. This has been good for us to adopt, since it serves to prevent us from reacting too swiftly and informally."

Tradition: It can be difficult when new blood comes onboard and wants to change long-accepted business practices. "Our partners have been open to us challenging established practices as often as they've been totally perplexed by us. As it happens, Vom Fass leadership is undergoing a generational change, which provides us an opportunity to help guide change in the company."