Raymond Li's interest in jet packs started when he saw the James Bond movie Thunderball at age 12. "There were a lot of cool gadgets in it, but that one stuck in my mind. I remember running to the library to do research on it, and doodling and doodling ideas," Li says. But it wasn't until 2002, more than 30 years later, that he was inspired to make his jet-pack dreams a reality.

Li, who lived in St. John's, Newfoundland, had sold his graphics business of 15 years and worked in real-estate investment when he began doodling again in earnest, this time with seed money from the National Research Council Canada and a partnership with the Institute for Ocean Technology, researching safety regulations and control mechanisms that would allow for stability in the air. In 2008 he finished a working prototype and, "against everybody's advice," moved to Fort Lauderdale, Fla., to facilitate year-round testing, eventually building a half-dozen units for use in recreational watersports that he sold to rental shops for thrill-seeking tourists. 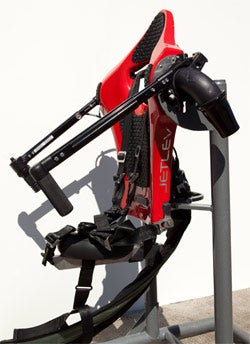 His invention, the JetLev, is a lightweight carbon-fiber jet pack that launches from an ocean or a lake. Fliers are strapped in, and a flexible hose attached to a 260-horsepower gas engine--the same type used in a premium Jet Ski--sucks in and shoots out water at the rate of 1,000 gallons per minute. The throttle power can propel a user 30 feet into the air and, at top speed, forward at 32 mph; two motorcycle-grip handlebars allow for steering with minute adjustments.

The average beginner gets a few feet out of the water, while practiced instructors can do everything from aerial flips to underwater dives to dock landings--one even pulls off a 45-mile commute from Newport Beach, Calif., to Santa Catalina Island. An NBA player has flown; so has a paraplegic. The device retails for $100,000. 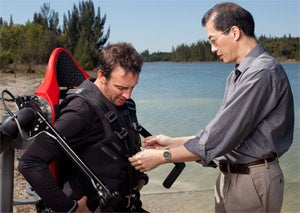 JetLev really took off in the fall of 2011, when the owner of a private investment fund discovered the website and decided to acquire the company, with Li staying on as CEO and board member Benjamin White coming in as president. "There wasn't a blueprint for a jet-pack market, so it's been an adventure commercializing this product," White says.

Since the March 2012 relaunch, JetLev has increased the number of units in service from seven to 150, and the company's staff has grown from seven employees to 25. The devices have logged 14,000 hours of flight time to date (with no injuries). Meanwhile, awareness has risen on multiple fronts: PC manufacturer Lenovo created a global ad campaign featuring Li and the JetLev, and the gadget was featured in the 2012 Neiman Marcus "fantasy gifts" catalog. 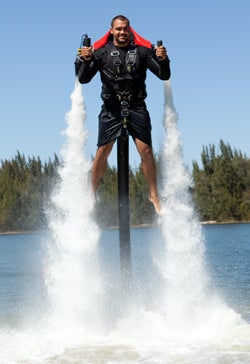 White says the 35 rental "flight centers" and resorts in the U.S. that offer JetLev rides account for 60 percent of unit sales; the rest come mainly from luxury markets such as the yachting community. (Tim Heywood, a premiere yacht designer, created 10 limited-edition units last year and donated the proceeds to charity.) White suggests that a potential market could be the military; for example, a Navy Seal could use JetLev to board a boat or patrol an area with superior height, visibility, maneuverability and speed.

The primary ambition, though, is to make flights more accessible to everyone by bringing down the price of the JetLev through economies of scale. "We see this as a product that fits in garages," White says. As a significant step in that direction, the company announced in March that the 2013 model will retail for $68,000; the ultimate goal is somewhere between $30,000 and $40,000. But the chance to realize a childhood dream? Priceless.