By Jason Ankeny July 3, 2013
This story appears in the June 2013 issue of Entrepreneur. Subscribe »

TJ Scimone didn't set out to build a cutting-edge startup--at least not in the literal sense. The founder and CEO of Campbell, Calif.-based product design firm Slice originally targeted the housewares market, developing ultramodern interpretations of kitchen staples like vegetable peelers and cheese graters. But when a pocket-size ceramic blade for opening CDs, DVDs and other shrink-wrapped items became his most popular product, Scimone pivoted, vowing to make common tools like box cutters and scissors both sleeker and safer. 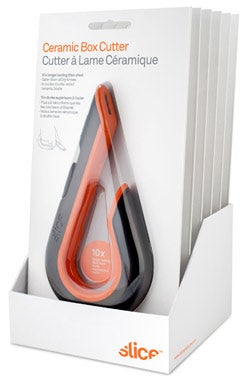 "Box cutters are scary and antiquated tools--most of them are dangerous and ugly," says Scimone, a serial entrepreneur who launched Slice in 2008 to fund long-term care for his autistic son, Alex, and who donates a minimum of 1 percent of all product sales to help fund autism research. "We wanted to make them safer and more functional, but also nicer to look at and use. People often think that just because something looks good, it doesn't work well. Consumers should have the best of both worlds."