Startup Offers a Digital Take on Art for Your Home

Entrepreneur
Al Linke is the Santa Clara, Calif.-based creator of Pixeled, an LED-based display for pixel art. To showcase a low-resolution masterpiece, users open a free Pixeled app on an Android device or a PC and tap the image or animation they want, sending it to the framed display via Bluetooth. When not in use, the Pixeled display looks like a mirror. 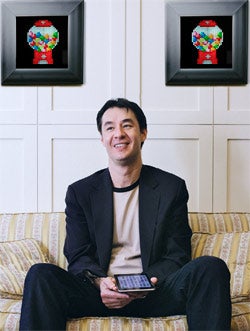 "Illuminating" moment
"I'm a techie, but a wannabe artist," says Linke, whose day job is IT director for a Fortune 500 company."If you follow the whole maker and open-source movements, there are a lot with LEDs, but you need to be techie to do a cool LED project. The vision was to create [one] anyone could do. It's as simple as picking an image from your smartphone."

Electric light orchestra
Think of it as an open-source Lite-Brite."There's this whole culture around pixel art; it's the whole retro thing," Linke explains."There's this movement around low-res, 8-bit art." He commissioned various pixel artists worldwide to design their bright ideas; developers can create their own applications using Pixeled's open-source software-development kit.

Images ranges from a gumball machine, pretzel or squid to animations of falling rain or space scenes. There's a proximity sensor behind the mirror for interactive animations--e.g., a smiling face that sticks its tongue out when someone gets close, or a Magic 8 Ball that fires back answers to burning questions. Additionally, users can display images they've drawn on an Android phone or tablet or a PC by saving it to one of Pixeled's app folders. 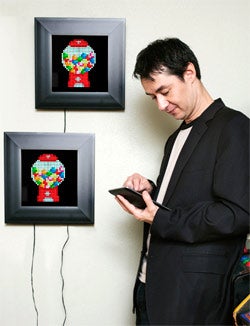 Feel the glow
"This is a hobby that turned into a product," says Linke. He and a friend spent six months developing a prototype in their spare time, with Linke fronting $3,000 of his own cash. They then posted the project to Kickstarter, raising more than $51,000 from 303 backers.

Lighting up
Linke is focused on getting the product out to the Kickstarter backers so he can use their feedback to improve the current version and develop the next. He is working on a full-scale distribution strategy; meanwhile, Pixeled is available through the open-hardware market Seeed Studio fully assembled for $259 or in a DIY"Guts" version for $185.

Up next
Linke started with Android because Apple isn't very"hobbyist friendly," he says. He's working now on an iOS app.