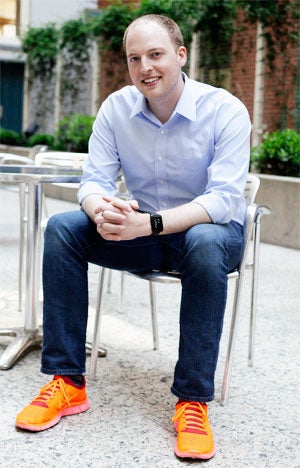 Big data has opened up giant opportunities for Dan Siroker. In 2008, as director of analytics for Obama's first presidential run, the former Google Chrome and Google AdWords product manager was tasked with figuring out which data and calls to action on the campaign's website would drive people to contribute.

Deciding what to try wasn't the hard part; Siroker could easily identify two elements for a head-to-head performance test. The bottleneck came in the logistics--every trial required an engineer or a developer to tweak some code. "Frustration set in pretty quickly," Siroker says. "We knew there had to be a better way."

That better way evolved into Optimizely, which simplifies A/B (or "split") testing--the process of comparing how two calls to action, colors, messages, price points or product mixes might perform online.

Siroker and fellow Googler Pete Koomen started San Francisco-based Optimizely in 2009. After completing the Y Combinator accelerator program the following year, the duo signed up thousands of small and midsize customers. By 2011 the company was operating in the black and counted Starbucks and Disney as clients.

Users activate a pop-up editing tool that allows them to test and implement changes on the fly without altering the underlying structure of their websites. For example, to get more customers to reload coffee cards online, Starbucks can test the effectiveness of having an ad on its homepage vs. placing a call to action on the coffee card's log-in screen. After determining what works best, the company can use Optimizely to change the source code accordingly.

Optimizely's biggest break came in 2012, when the Obama campaign rehired Siroker, who helped boost the conversion rate for the president's donation page by 50 percent. "Our success in 2012 really put us on the map," Siroker says.

Clients pay on a scale based on web audience, starting at $19 for sites with 2,000 monthly visitors. Optimizely's revenue surged 400 percent from March 2012 to March 2013, according to Siroker, crossing into the "double-digit millions." The explo-sive growth preceded a $28 million Series A funding round led by San Francisco-based VC firm Benchmark, bringing total investments to more than $31 million.

Benchmark partner Peter Fenton says he was attracted to a product that seemed easier to use and less expensive than others on the market. "The potential, broadly, for A/B testing is about 1 percent realized in terms of sites and companies that have deployed these tactics," says Fenton, whose previous investments include Twitter and Yelp. "We consider these to be the early days."

Optimizely is prepping for continued growth: The firm, which currently has 75 employees, signed a lease on a new 450-seat office space. In the spring Optimizely rolled out the platform in nine additional languages, part of a broader strategy to expand in Europe (the company has an office in Amsterdam) and elsewhere. As for the product itself, the company wants to give its customers the ability to show specific content to targeted clients at any time.

"How amazing would it be to be able to deliver targeted messaging or unique designs to every customer who visits your site?" Siroker asks. "It's all part of our plan to transition to an organic and data-driven meritocracy of ideas."

The No. 1 Reason You're Not Experiencing Consistent Revenue in Your Business