By Margaret Littman December 7, 2013
This story appears in the November 2013 issue of Entrepreneur. Subscribe »

It started as many side projects do, with a few friends and a few bottles of wine. But the idea really took off once the talk turned dirty.

Former Seattle Seahawks offensive tackle Chris McIntosh and some friends were discussing Ironman triathlons. They wondered if there was a way athletes who don't have the stamina to compete in a traditional Ironman event could still experience the positive energy of a collaborative race.

In 2011, they launched Dirty Girl Mud Run, producing three mud-soaked obstacle-course races for women, in upstate New York, Wisconsin and Colorado. "We had no event experience, which was a blessing. Ignorance is bliss. We did not need to abide by industry standards," says McIntosh, who serves as president of the Delafield, Wis.-based company.

McIntosh, whose pro ball career was cut short by injury, had plenty of sports contacts, which helped make up for his lack of events expertise. Within 90 days of opening registration, the Wisconsin race had 6,000 registrants.

Dirty Girl events--5K adventure courses with obstacles to climb and jump and mud pits to slog through--target women who are new to sports and fitness. Designed to be unintimidating, the events focus on team cooperation rather than timed competition. The average participant is 38 years old, but Dirty Girls have ranged in age from 14 to 80. (Now and again, men try to "sneak through" registration, but the women-only rule is ironclad.) Ninety percent of entrants participate as part of a team, many of them holding hands across the finish line. 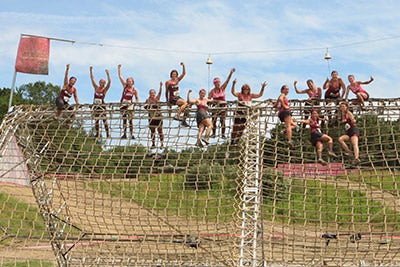 That "we're all in this mud pit together" attitude is gaining traction. Dirty Girl will close 2013 with some 50 events; average attendance is 7,000. McIntosh won't disclose revenue, but based on registration fees of $65 to $100, sales for 2013 will likely pass $22 million. "This is no longer a side project," McIntosh confirms.

He credits the company's success to "our customers' evangelism." Looking ahead, the team is making some changes to sustain growth. For example, they've learned that even in Florida, February temperatures have dissuaded women from participating. So they plan to start the 2014 schedule later in the year, scaling back to 43 events. They're also planning to expand overseas and are considering new types of events, as well as selling branded merchandise in a retail setting.

Dirty Girl is also ramping up philanthropy efforts. The company allots 300 free slots at each event for cancer survivors and says that this year it will donate $250,000 to Bright Pink, a Chicago nonprofit focused on early detection of breast and ovarian cancer.

"Our mission," McIntosh explains, "is to encourage women to overcome obstacles."