They're young, hip, smart … and crying in their parents' basements. Thirty-six percent of Millennials--otherwise known as Generation Y, which includes those born in the early 1980s to the early 2000s--were living with mom and dad last year, according to a report by Pew Research Center. Those 21.6 million people represent the highest share of young adults living at home in at least 40 years.

"[From] a long-run perspective, this is a relatively new phenomenon. If you look from the early 1980s to 2007, the share of young adults living with their parents wasn't up that much; it was fairly stable up to 2007," says Richard Fry, author of the study. "There's a basic association between employment and whether you live with mom and/or dad. ... Having a job is a springboard to being able to have independent living arrangements." 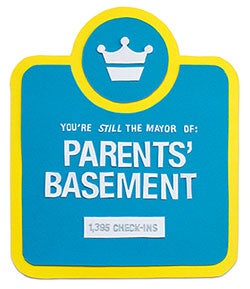 In 2012 only 63 percent of young adults had jobs, down from 70 percent in 2007. A June Generation Opportunity jobs report measured the effective unemployment rate for 18- to 29-year-olds at 16.1 percent. While Pew reports that one-third of 25- to 29-year-olds in the U.S. had completed at least a bachelor's degree in 2012 (a record number), a survey by Braun Research for staffing firm Adecco found that 66 percent of hiring managers do not believe college grads are ready for the work force. Rather than hiring new graduates for entry-level positions, recruiters are looking to take on people with experience.

"I think at the most fundamental level, we have a jobless recovery," says David Grusky, professor of sociology at Stanford University and director of the Stanford Center on Poverty and Inequality. "We have fewer jobs in terms of the proportion of the potentially working population. We're having good stock market performance, money is being made, but workers are not bearing the fruits of that recovery the way all of us would like."

If being unemployed and stuck in their childhood homes isn't dispiriting enough, Millennials also seem plagued by a worldly dissatisfaction that is new to this generation. Raised by doting Baby Boomers with the notion that they could be anything they dreamed of, Millennials made "follow your passion" a catchphrase for career inspiration, expecting to bask in the economic prosperity of their forefathers and find not only a job, but a fulfilling one at that. Instead, they graduated into one of the worst economic downturns in history.

So what does the future hold for Millennials? Will the murkiness of a career path have them reconsidering job-hunting and turning instead to job-creating?

"Evidence shows that the proportion of income that goes to capital as opposed to workers is increasing," Grusky says. "The implication is that this is a good time to be a capitalist, bad time for workers." Ominous, perhaps, but this could spur fresh ideas, a more innovative economy and a generation of entrepreneurs. And who's better at navel-gazing than a Millennial?