This Startup Won't Sleep Until it Revolutionizes the Mattress Industry

By Jason Ankeny June 15, 2015
This story appears in the June 2015 issue of Entrepreneur. Subscribe »

Goldilocks had it easy—she had to test only three beds and found one that was just right. Real-world mattress shopping is a far more daunting proposition. According to a 2014 survey by the Better Sleep Council, consumers are confused about when to replace a mattress and how much to spend, and they’re flummoxed by the multitude of product options and the awkwardness of trying out beds in public.

Casper wants to put those concerns to rest. The New York City startup created a patent-pending sleep surface that fuses memory foam and latex foam to make bedtime better for virtually everyone, regardless of body weight or sleeping position. The mattress is available in six standard sizes from twin ($500) to king ($950), and Casper will ship it direct to consumers for free, letting them live with it for 100 days—satisfaction guaranteed, or their money back.

“Buying a mattress ranks up there with buying a used car for the worst customer experience,” says Jeff Chapin, Casper’s chief of product. “You go to a mattress retailer, and they’ve got 50 beds for you to try. There’s no way you can differentiate. You end up buying one and taking it home and second-guessing yourself. We wanted to eliminate all that.” 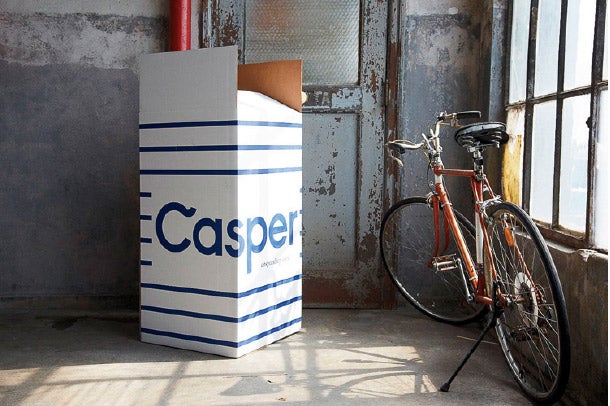 But memory foam suffers from poor permeability, meaning it tends to get hot. Moreover, it’s slow to recover from pressure, so people get stuck in grooves created by their bodies when they switch sleep positions, and it has no bounce (bad for sex). Casper’s solution: a 1.5-inch layer of latex foam on top of the memory foam. “Combining latex foam with memory foam gives you the best of everything,” Krim explains. “It gives you a bed that has traditional springiness and feels great, but reduces pressure points and contours to the body while also circulating air.”

The Casper mattress is so flexible that it folds into a box small enough to fit into the trunk of a car. Machines at the final point of assembly squeeze the mattress into a “W” shape, and a special sleeve keeps it compressed until it’s removed from the package. The approach allows Casper to ship its mattresses anywhere in the contiguous U.S. and Canada via UPS. In New York, the company offers same-day delivery via bike messenger.

Casper launched in April 2014, buoyed by a $1.85 million seed round spearheaded by Lerer Hippeau Ventures. Revenue reached $20 million in the first 10 months. Last August, the company announced a $13.1 million Series A round led by NEA, with additional participants including Ron Conway’s SV Angel and Ashton Kutcher’s A-Grade Investments.

Next up for Casper: not another mattress. Indeed, the company made a conscious decision to create a single, one-size-fits-all mattress concept.

“When you check into a hotel, they don’t ask you what firmness you need on a gradient of 1 to 100. They’ve designed one bed to be comfortable for everyone,” Krim points out. “That was the bar we set for ourselves.”

Casper will instead scale its business by improving other facets of the sleep experience—it is considering products like pillows, sheets and comforters. “We want to be the world’s first global brand around all things sleep,” Krim says. “Every day you read about how sleep is connected to happiness and productivity and creativity. It’s such a large category—and such an important category.”