Why Women-Only Coworking Spaces Are on the Rise

In a growing crop of single-sex co-working spaces, women are harnessing community, inspiration and success.

By Kate Rockwood June 5, 2017
This story appears in the June 2017 issue of Entrepreneur. Subscribe »

Picture a hip, energetic coworking space. Now erase the beer kegs and Ping-Pong table, and conjure, instead, pale pink walls, cozy reading nooks, oversize bathrooms with stocked showers and a library full of books by lady writers. Welcome to the world of women-only and women-centric workspaces.

“Members say they’re so much more productive, and they feel like there’s less pressure in an environment without men,” says Audrey Gelman, cofounder of The Wing. The first location, a 3,500-square-foot space in New York’s Flatiron District, opened in October, attracting members ranging from fashion designer Jenna Lyons to actress and model Hari Nef. The waiting list for membership is hovering around 3,000, and The Wing is planning three new locations, for SoHo, Brooklyn and Washington, D.C. (When the D.C. location was announced, it got 1,000 applications within 24 hours.) 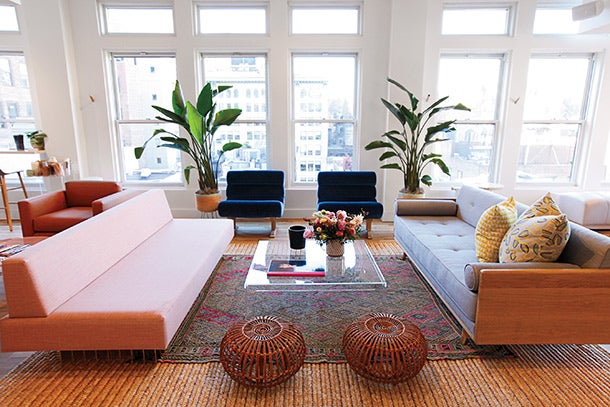 The Wing is not the only entrant into this booming new sector. There’s Shecosystem in Toronto, Paper Dolls in Los Angeles and Rise Collaborative Workspace in St. Louis.

In San Diego, Felena Hanson opened Hera Hub after noticing that local coworking options tended to be all suits or all bros.

“I wanted a space that supported women,” she says. “It’s a demographic that was badly ignored.”

Related: 4 Reasons Why More Women Should Join a Coworking Space

Appealing to women includes, of course, the interior design, but it has to be more than skin-deep, Hanson says. Hera Hub, which has expanded to six locations, including Stockholm, has an angel investment arm for female entrepreneurs. At Rise, a mentorship program allows teenage women to meet with and shadow members. And The Wing’s programming recently included a book club, a seminar on depression and anxiety, a workshop on spring floral arrangements and a talk by former Obama consigliere (and Wing member) Alyssa Mastromonaco. “Women are constantly managing and juggling,” says Hanson. “With a women-centric space, they’re able to be open and candid in a supportive setting.”