Samsung | Brand Spotlight Partner What is this?

How Wearables Will Change the Workplace

You might not wear your heart on your sleeve, but your apps might soon be there as well as on your wrist, your waist, and many pieces of your apparel. Wearables devices (like smartwatches, smart glasses, and virtual reality headsets) burst onto the scene a few years ago, and are slowly changing the way people live and work.

Chief Information Officers (CIOs), those overseers of technological innovation, are even more buoyant over the technology: 81 percent believe wearable computing devices, such as watches and glasses, will become common workplace tools, according to survey by IT staffing firm Robert Half Technology, a division of Robert Half International.

Several terms have been coined for the unobtrusive way in which wearables allow people to conduct business such as "disappearables" or "enchanting objects."

For example, the Samsung Gear S2 smartwatch has an intuitive circular face and bezel that lets the wearer navigate effortlessly to get to what he or she needs. Important calendar and email notifications come right to the wrist. If someone calls during a meeting, the wearer can glance at the watch, swipe to reject the call and send an auto-response without anyone realizing what they're doing. 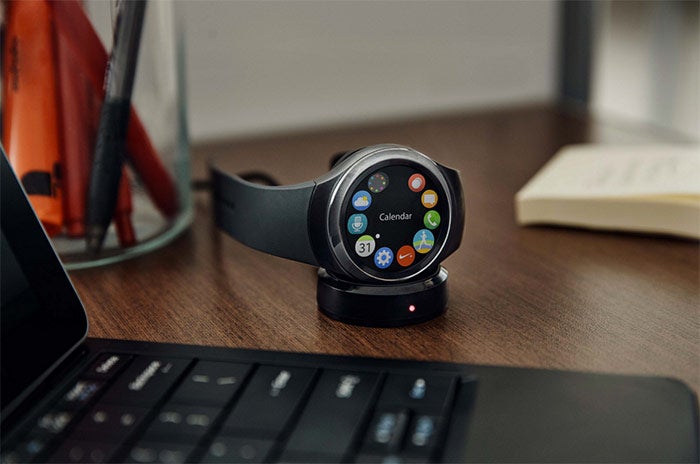 No wonder Smartwatches: the Good, the Bad and the Ugly, a paper from the University College of London, found using smartwatches made people less "rude," in the words of the very people who were using the smartwatches. Kerry Bannigan, president of Nolcha, an event production company located in New York City, saw this after giving smartwatches to her half-dozen workers. Being able to see emails and texts on their wrist eliminated their need to constantly gaze at their phones. "It's much less disruptive in meetings, and it's less noticeable to clients and other people they interact with," she said.

Human Cloud at Work, a study from Rackspace, an open cloud company, and the Institute of Management Studies at Goldsmiths, both in the United Kingdom, found employees who use wearables are 8.5 percent more productive compared to those without such devices. The same study found the wearables also increased job satisfaction. 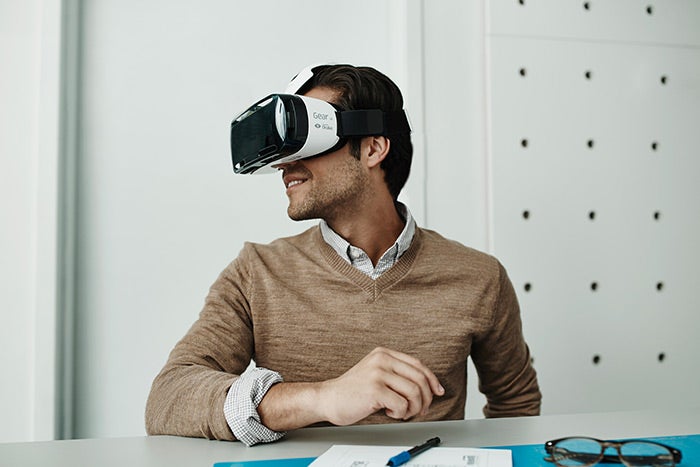 Wearable devices allow workers to stay more focused. Wireless headsets, high-tech lanyards, or wrist displays give workers all the information they need in a convenient place, allowing them to handle a customer's needs without leaving their side to check or seeming to be more focused on a mobile device than on the customer.

And new customer experiences are being created with virtual reality technology like the Samsung Gear VR. Powered by Oculus, this device snaps into a compatible smartphone and allows one to dive into a virtual reality experience including 2-D & 3-D 360° video and photo navigation with a combination of head movements and intuitive touch controls.

Wearables help people work more efficiently in other ways. For example, microphone-enabled smartwatches may make it easier to take notes or dictation, letting you retain key information from conference calls and meetings.

With a growing number of apps for smartwatches and other wearables, companies are finding all sorts of new ways to benefit from this technology. For example, Plastic Mobile, a mobile application design and development company with offices in Toronto and New York City, used wearables at an event to track social interactions, which were put on a leaderboard to incentivize people to engage with each other.

Such wearable devices could also be used to guide people on who they might like to meet at an event, based on information that was supplied beforehand. The only limitations to wearable uses is imagination.

The Samsung Gear S2 also provides fitness and health-tracking capabilities such as steps taken or a heart rate through a technology called S Health, which is another big reason behind the growing demand for wearables. The Consumer Technology Association, based in Arlington, Virginia, found almost three-quarters of people plan to purchase a health or fitness tracker in the next year, with a third opting for smartwatches.

Nolcha's Bannigan notes that providing fitness trackers to her workers provided a huge benefit. "When we are working a show, we put in long hours, and people gulp down a lot of junk food," she says.

However, the wearable fitness tracker showed her workers how many calories they burned just moving around, which made them want to tend to their health better. When her workers used wearables to track their diets, Bannigan saw they began opting for water instead of coffee and salads instead burgers. "Those changes really boosted morale," she says.

Like any new technology, a small business should evaluate how to use wearables in their business most effectively. According to Robert Half Technology, companies should ask themselves three questions about wearables:

Shipments of connected wearables soared to 72.5 million in 2015, up from 25.3 million devices in the previous year, according to a report from Swedish market research firm Berg Insight. So understand wearables are coming to your business—and maybe even your wrist—very soon and start preparing for them.

To learn more about how Samsung's technology is transforming the way business is done, visit samsung.com/us/business, or visit our blog for related articles, case studies and white papers: insights.samsung.com.