Is the Nexus One an iPhone Killer?

A smartphone that lets you make up your own mind

By Jason Ankeny
March 12, 2010
This story appears in the April 2010 issue of Entrepreneur. Subscribe » 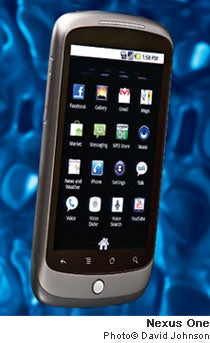 We know what you're thinking: "Another iPhone killer?" But the Nexus One is different. Really. It's Google's first-ever branded hardware release, and it runs on the digital services giant's Android operating system, which means it boasts features such as Google Maps Navigation, voice-enabled text input, e-mail (including Exchange support), contact aggregation from multiple sources and access to the Android Market virtual storefront, which offers nearly 20,000 applications.

But what truly sets apart the Nexus One is how it's sold and supported: Google markets the device through its own dedicated web store, and users can either buy it unlocked and insert their own SIM card for $529, or else sign up with one of the company's operator partners (including T-Mobile USA and Verizon Wireless), for $179. Google plans to introduce subsequent devices adhering to the same core concept--offering small businesses a smorgasbord of devices, service-plan options and apps tailored to their needs. In other words, the Nexus One's killer app is personal choice--and for small-business mobility, that might be the most radical innovation to date.