Is it Really Innovation?

Peter Diamandis talks about what innovation really is while Tim O'Reilly calls the I-word era "dead on arrival."

By Joe Robinson
October 13, 2009
This story appears in the November 2009 issue of Entrepreneur. Subscribe » 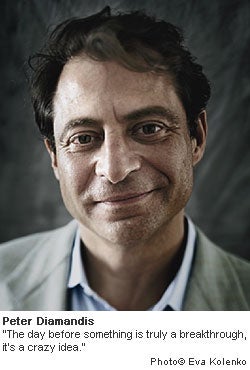 Peter Diamandis sees a future filled with brilliant innovation--with cars that drive themselves, software that can diagnose illnesses and humans populating new planets like subdivisions--but not without a lot of failure before we get there.

"If you're not willing to fail, to do something that fails and fails until you get it right, then you're stuck," says Diamandis, founder of the X Prize Foundation, a nonprofit group that holds global competitions to spur innovation in technology and other disciplines. "I fear that we have become very risk-averse in our society--when you do something risky, it means having a willingness to fail."

No, Most Remote Employees Aren't Working on the Beach. This Survey Reveals Where They Actually Live.