By Kara Ohngren Prior
May 17, 2010
This story appears in the June 2010 issue of Entrepreneur. Subscribe » 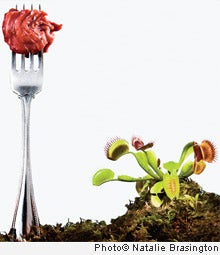 It started as a fascination with flesh-eating flora. It was the 1960s, and Peter D'Amato ordered a single Venus' flytrap from Famous Monsters magazine. Alas, the plant quickly perished.

But soon after, a friend brought him to a bog on the Jersey Shore, where he found thousands of the fly-eating plants growing wild. He was hooked, and by the mid-'80s, D'Amato had moved to San Francisco and claimed to have accumulated the largest personal collection of hungry potted plants in the United States. Soon enough, they devoured D'Amato's life, too. He left his job as a resort manager and opened California Carnivores, a nursery that sells nothing but carnivorous plants--more than 1,000 varieties in an 11,000-square-foot space in Sebastopol, Calif.