Tap Into the Boomer Market

Baby boomers: 76 million strong and a force to be reckoned with.

By Matt Thornhill
April 8, 2009
This story appears in the May 2009 issue of Entrepreneur. Subscribe »

There's a long-held belief in marketing that once consumers reach age 50, they're dead. That's because for the past40 years, businesses trained their budgets on younger adults, ages 18 to 49. When a consumer reached 50, he vaporized--unless, of course, he needed denture cream or incontinence products.

Marketers are finally awakening to the demographic tsunami of the nation's baby boomers. Born during the post-World War II prosperity from 1946 to 1964, boomers are 76 million strong--comprising 1 in 4 Americans. However, in the past decade, this massive generation became invisible at the rate of 10,000 members per day as they passed the five-decade mark. Now the recession is prompting businesses to rethink marketing.

The fact is boomers spend far too much money to be ignored during tough times. By some estimates, they spend $400 billion more per year on goods and services than any other generation. The numbers tell the tale: According to our analysis of U.S. Census data, over the next 10 years, the 18 to 49 age segment is projected to grow by only 1 percent to about 137 million. Meanwhile, the 50-plus age segment will swell 21 percent to 116 million. 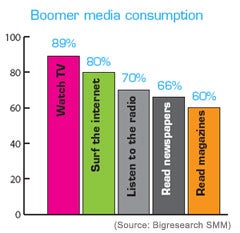 Any marketer worth his salary should be hard at work developing plans for this segment. "In many categories, our data shows that boomers spend as much each month as any other generation, on a per capita basis," says Phil Rist of Bigresearch, which conducts monthly surveys of more than 7,000 consumers, track-ing their spending. "But there are so many more of them."

That's one reason Bill Dahlquist, 42, invested in a Home Instead Senior Care franchise in 1999. "We saw boomers and health care as essentially recession-proof," says Dahlquist, who brought in 2008 sales in the multimillions. "The demand for in-home professional care giving is going to explode as boomers grow older."

Smart entrepreneurs who want to refocus on boomers need to get the new rulebook. Boomers at 50 and beyond are very different from the Golden Girls generation. Having never experienced the Depression or World War II, they're far more optimistic about the future--no matter how many dark clouds loom now.

Today's Boomer Consumer
Businesses need to understand today's boomers from three perspectives: 1) where they are in their heads in terms of what drives their behavior; 2) where they are in their lives in terms of lifestyle and life stage; and 3) how their shared generational experiences coming of age in the late '50s to early '70s shape their perceptions. Through these lenses, marketers can better connect with this demographic.

Psychological: Boomers have reached a stage of cognitive development in which they're driven more by internal motivations than external. Gerontologist and boomer expert Ken Dychtwald calls this shift "from success to significance."

Sociological: The linear, predictable lives of previous generations are no longer relevant. Boomers find themselves at a million different life stages. Some are empty nesters, some still have kids at home, some are retired and others are starting businesses.

Anthropological: The "Wonder Bread Years" for boomers established traits that cut across the entire generation. Boomers are driven, self-centered and transformational. As they evaluate any offering, they want to know, "What's in it for me?" They have more vigor and vitality than ever.