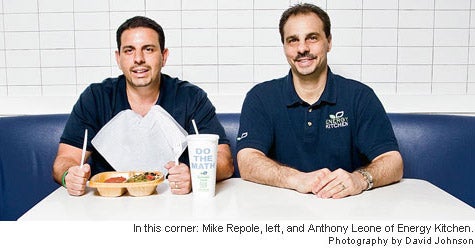 You would think the American fascination with health and fitness has hit critical mass: Freezer cases are full of low-cal meals in grocery stores and farmers markets are booming. Mini gyms and yoga studios have filled in almost every vacant street corner. Fitness themes have even wiggled their way into the domains of their archenemies: video games and network television. But there is one industry--perhaps the one with the best chance of helping us fit into our skinny jeans--that has remained stubbornly out of step when it comes to our obsession with shaping up: restaurants.

A generation ago, dining out was an indulgence--but today, the average American grabs something off the menu four to five times a week. More than a few of us dine out almost nightly, and the numbers seem to be trending upward. Michael Pollan, the voice of the "real food" revolution, has said cooking at home will be as odd to our grandchildren as slaughtering a chicken is to us. The problem is, while eating out has lost its Friday-night glamour and corner booths have replaced the dining room, restaurants are still stuck on their legacy of indulgence, serving enormous portions and spiking them with more and more fat, salt and sugar.

Lately, though, two big players in the chain and franchise restaurant world have put their money on the idea that low-calorie, deep-fry-free zones are the next big culinary trend. Both concepts--Energy Kitchen, backed by Vitaminwater multimillionaire Mike Repole, and Seasons 52, powered by Darden, the behemoth behind Olive Garden, Red Lobster and Longhorn Steakhouse--have designed entire menus around fresh, baked, steamed or grilled food. Both plan major national expansions over roughly the same time period, and both have menus built around dishes that weigh in at 500 calories or less.

But their approaches part ways from there. While Energy Kitchen hopes to steal market share from fast-food and fast-casual restaurants through a national franchise program, Seasons 52's company-owned stores are targeting serious foodies who want to dine well, without developing gout. Which will prevail?

In one corner, there's Anthony Leone and Energy Kitchen. When Leone went to Manhattan for business, he tried to eat well--but getting a truly healthful, quick-serve meal from an average New York restaurant is a losing proposition. "If you go into a deli and order an egg-white omelet, the first thing they do is squirt oil all over the grill," says Leone, a former district manager for Boston Market and Ranch 1. "I wanted to build a place where I'd actually want to eat."

Leone's solution was the fast-casual Energy Kitchen, launched in 2003, where nothing on the menu is more than 500 calories, everything is baked, steamed or grilled, and full-calorie sodas aren't even an option. "It's fast food without the guilt," he says. "There's no temptation in our store--you can't mess up."

Since then, Energy Kitchen's bison cheesesteaks, mashed sweet potatoes and Thai chicken wraps have gained a cult following in New York, complete with sightings of celebrities from Renï¿½e Zellweger to Q-Tip. Repole's recent investment means the 10-store low-cal concept--all of the current outlets are in New York and New Jersey--is preparing to franchise 1,000 locations nationwide during the next decade. This year, it plans to open 15 to 25 franchised units on the East Coast, including four in Boston.

In the other corner, there is Stephen Judge and Seasons 52. In 2000, research conducted by Darden showed a strong consumer appetite for a healthier alternative to fatty restaurant foods such as spinach-artichoke dip. That led to Darden's Seasons 52 concept, a high-end casual restaurant where everything is baked, steamed or grilled, nothing tops 475 calories, and the menu changes quarterly, sometimes weekly, depending on what is in season.

"The old thinking was, if the food is good for you, it can't be satisfying or taste good," says Judge, who was brought onboard in 2007 to oversee the restaurant's transition from a test market into a chain. So far, Seasons 52 has moved from its Florida and Atlanta test zones to New Jersey and is heading to Pennsylvania, California and Illinois this year. "I think Seasons 52 has cracked the code," Judge says. "We've figured out the DNA of creating great-tasting food with positive lifestyle benefits."

So why is the healthful restaurant vanguard getting underway now? As more cities and states begin mandatory nutrition labeling on menus--so far New York City, Oregon, California and several major cities, with similar legislation pending in 15 states--Repole sees consumers making a major change in their eating habits. "People are going to walk into Starbucks and realize a muffin has 500 calories, and they'll just walk away," Repole says. "They're going to see that 2,100-calorie Bloomin' Onion and second-guess their order."

(Well, according to Outback Steakhouse, that Bloomin' Onion is actually 1,560 calories.)

But will ostrich burgers really fly, no matter how lean they are? Darren Tristano, executive vice president of Technomic, a restaurant industry research firm in Chicago, isn't sure the heartland is ready to trade in well-marbled Black Angus for ground turkey wraps just yet. He points to UFood Grill, a Boston-based low-cal chain similar to Energy Kitchen that tried to expand to Chicago. Last summer, the Chicago franchisee closed all three locations because of poor sales after less than a year in business. "They have really high-quality food, and when they first opened, there were long lines to get in," Tristano says. "But for whatever reason, they didn't make it in Chicago." 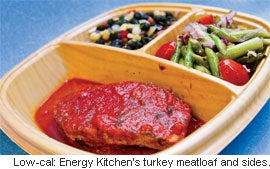 Repole is conscious that the market for Energy Kitchen's fare might not be mainstream yet--turkey meatloaf and edamame isn't exactly a Quarter Pounder combo meal, after all. But he's confident that Americans' tastes are changing. It's the same process he saw when developing Vitaminwater.

"In 1999, when I introduced Vitaminwater, people looked at me like I had two heads. That product wasn't mainstreamable back then," he says. "We started on a regional strategy focusing on urban markets like New York, Miami, Philly, Boston, D.C., San Diego, San Francisco. Our growth didn't happen overnight. Is Energy Kitchen ready to be a national chain today? Probably not. I think 1,000 stores over 10 years is about right. It takes time for consumer trends to turn."

Seasons 52, on the other hand, is taking a whole different approach to its growth and has exceeded expectations at most of its nine locations. Instead of playing up the fitness and nutrition angle, it is angling for an established, freer-spending market: foodies.

"We are completely focused on seasonality, and we have the ability to procure the finest ingredients because we have an economy of scale like nobody else," says Judge, who points out that culinary director Clifford Pleau and master sommelier George Miliotes, both from Disney World's California Grill, are likely to carry weight with educated customers. "We're really focused on the savvy socializers, people who are food and wine forward and like to explore different dishes. But we also make sure the food is good for you."

Tristano is impressed by Seasons 52 and says it's chosen the right niche to pursue--savvy eaters rather than the fast-food crowd.

"Many local restaurants may be seasonal or locally sourced or low-calorie, but the flavor is not always there," he says. "Seasons 52 has grown slowly and really focused its concept over the last five years. They have a good opportunity to grow and become the primary brand occupying that space."

The biggest challenge to both concepts, however, might come from established chains finally waking up and realizing that consumers want truly healthful options, not 1,500-calorie mega-salads. At the beginning of the year, Applebee's rolled out a line of 550-calorie entrees, and it's likely that other casual chains will follow suit. In many cases, though, restaurants are simply rearranging menus to highlight low-cal items they already serve, such as Corner Bakery, which simply grouped together its 100 items under 600 calories.

Still, having a 450-calorie shrimp-and-rice salad next to a 1,000-calorie burger on the menu means temptation is still lurking, and that gives concepts such as Energy Kitchen and Seasons 52 an advantage. In fact, Repole says a greater focus on calorie counting by other chains will only drive more people to Energy Kitchen and prepare the way for a national expansion.

"With increased education and access to information on the Internet, eating right is not going away," Repole says. "We want our food to be transparent to all our customers. Making the right food choices is not a fad--this thing has legs all across the country."


Jason Daley is a freelance writer based in Madison, Wisc.