By Kim Orr
August 11, 2009
This story appears in the September 2009 issue of Entrepreneur. Subscribe »

After writing a business travel column for The New York Times for more than 10 years, Joe Sharkey has endured a lot--delayed flights, lost bags, an emergency landing in the Amazon jungle (seriously). We caught up with him just before he boarded a flight to London. One hopes, not in the middle seat. 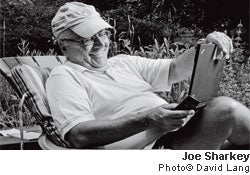 Is technology really replacing business travel?
Video-conferencing has been around for about 10 years, and for the past nine I've been very skeptical that it was going to replace business travel in any substantive way. But now an awful lot of self-employed business travelers--and that's been a huge growing market in the past five years--are saying they're occasionally using these technologies to supplement their ability to have meetings. I know a consultant who used to travel every week, and he's cut his business travel by more than half with teleconferencing. But I also know a guy who's a scrap dealer in upstate New York, and the only way he can run his business is through personal meetings. There are some businesses where you've got to look people in the eye--and scrap metal is one of them.