Jim Pohlad inherited a failing team-the Minnesota Twins--on the verge of disappearing from baseball. What saved it? Thinking like a small business.

By Bruce Schoenfeld
July 16, 2010
This story appears in the August 2010 issue of Entrepreneur. Subscribe » 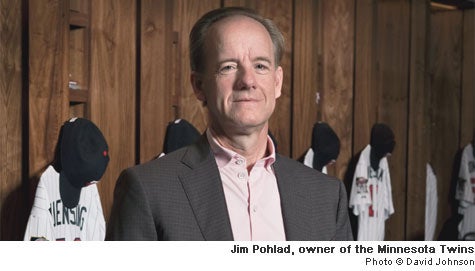 There's a buzz in the air in downtown Minneapolis on an overcast April afternoon. Baseball's Minnesota Twins are poised to play the Red Sox at Target Field in only the second regular-season game at the new ballpark. As fans file in, nearly all for the first time, their sense of anticipation is palpable. What they encounter is a strikingly original facility that features limestone-topped dugouts, a four-story, glass office tower with a roof deck where fans can watch the game from bar stools, even a shimmering wind-activated sculpture by artist Ned Kahn. "This is the best of the new ballparks in all of baseball," someone says, and he doesn't get an argument.