By Jonathan Blum
October 21, 2011
This story appears in the October 2011 issue of Entrepreneur. Subscribe » 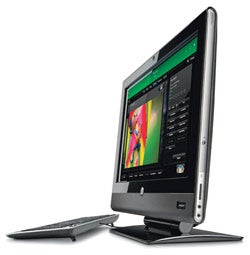 The HP TouchSmart 610xt is powerful and durable enough to do double duty as a PC and an interactive terminal.
Image courtesy of HP

The touch-based tablet revolution is creating some unexpected consequences: So-called touch capacitance technology--that's geek-speak for the technology that gives us the ability to control our Apple iPads or Motorola Xooms with our fingertips--is finding its way into traditional desktop PCs.

Granted, touch PCs are far from the bottom in terms of cost, but they do offer some intriguing options. Desktop touch PCs make excellent interactive retail kiosks and can be modified to run touch-activated reservation and inventory software. They can even be shared work terminals on which customers and staff collaborate--to fill out complex forms in medical office waiting rooms, for example--to dramatically improve the accuracy of entered data.