Where the Connected Get Clued In

Mashable.com went from social media tracker to sensation in its own right.

By Kara Ohngren Prior
November 13, 2009
This story appears in the December 2009 issue of Entrepreneur. Subscribe »

Just like social media itself, Mashable.com seems to have surfaced out of nowhere: Pete Cashmore was a web technology consultant from Scotland who wanted to launch a cool website. He started chronicling his trials on a blog and unintentionally launched what is now one of the web's most popular sites focused on web 2.0 and social media news.

Mashable's success (gauged by 13 million monthly page views) is an outgrowth of the immense popularity of social media: The site offers news, advice and education and in general keeps the socially networked more socially aware.

Revenue comes from a job board, educational events and conferences, as well as advertising and sponsorship. And of course Mashable takes its own advice, employing social media to boost its following. @Mashable has 1.5 million followers and is consistently the most retweeted member on Twitter.

"We're in a fortunate place where our readers essentially do our marketing for us," Cashmore says. 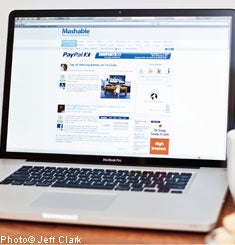 Mashable Lists
Mashable is becoming known for its topical lists, which range in subject matter from music to politics. The "how-to" lists are particularly popular.

'Spark of Genius' Series
Each week, the Mashable team highlights a promising new startup and the features that separate it from the competition. Spark of Genius companies must be no more than 3 years old with an active site and have less than $1 million in annual revenue.

Job Board
Employers can post open positions on Mashable for 30 days for $50. "We've seen our job boards bring in more revenue recently because of the economic climate," Cashmore says.

The Twitter Guide Book
This user manual teaches not only how to tweet and retweet, but also how to build a community on Twitter and use the tool for small business. "It's a complete collection of resources for mastering Twitter," Cashmore says.

The Blog
Mashable's bloggers review new websites and services, publish breaking news and offer social media resources and guides. "If you don't have quality content, no one's going to want to read it or share it," Cashmore says.