By Margaret Littman
April 1, 2012
This story appears in the April 2012 issue of Entrepreneur. Subscribe »

When Justin Gold first moved to Boulder, Colo., to ski, bike and decide what he wanted to be when he grew up, he did what most underemployed twentysomethings do: He found roommates. And they did what most roommates do: They took his stuff without asking.

That stuff included Gold's homemade almond butter, which he relied on to increase his protein consumption before long bike rides. Eventually, tired of his roommates' pilfering ways, Gold scrawled his name on his nut-butter containers.

But today Gold is grateful to those former roomies, because Justin's--yes, he still puts his name on every jar--brought in $11 million last year, with a loyal customer base, national distribution and plans for expansion.

Gold started researching how to launch a natural and organic foods business in 2002. He wrote a business plan and scoured his contacts to find a commercial kitchen to borrow, ultimately driving the hour from Boulder to Denver late at night to use a kitchen there. He worked at outdoor-gear retailer REI during the day and delivered his products on weekends.

The first Justin's items were natural peanut and almond butters packaged in jars. The line was successful, but the category was crowded, offering limited potential for growth. In 2006, Gold got an idea from the goo packs, gels and other squeezable energy boosts sold at REI. "I did not want a sugar gel; I wanted a protein pack," he says. "With squeeze packs we could dictate prices and we could sell them everywhere."

He raised cash from friends and family, threw in his own life savings and bought a squeeze-pack machine. Soon Whole Foods Market began stocking Gold's squeezable, single-serve nut-butter packs in its stores. But instead of placing them near the other nut butters, the packs were mixed into the energy-bar section. And they failed. 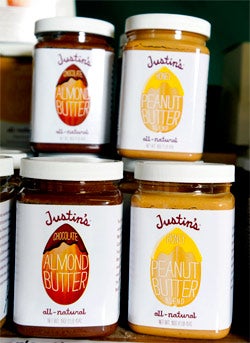 "It has made our team members an army of people who care about the product."
--Tom Rich, Whole Foods Market

Luckily, Gold's company had developed good relationships with retailers, thanks to years of doing demos and undertaking other brand-building initiatives, not to mention handling its own restocking--all of which earned Justin's products another chance.

"They built really good relationships with team members," says Tom Rich, Rocky Mountain grocery coordinator for Whole Foods Market. "[Gold] has great people working for him. They connect with customers; they are focused and present when they do sampling. It has made our team members an army of people who care about the product."

The second time around, Justin's single-serve packs were placed in the peanut-butter aisle. "Two things happened," Gold says. "Consumers knew what it was. In the energy-bar aisle they said, "What the hell is it?' And for the consumer who never tried almond butter before, they could try it for 99 cents. And then they would come back and buy a $10 jar. They ended up spending more money."

Justin's turned a profit in 2008. A year later, after REI decided to stock his nut-butter packs, Gold quit his retail job. Next, he raised $1 million from angel investors and expanded again, this time into peanut-butter cups, including a dark-chocolate vegan variety. The candy fits with Gold's mission to create natural, fair-trade and organic versions of conventional foods already known and loved by consumers. Trade magazine Progressive Grocer named the candy one of the best rollouts of 2011.

The candy and squeezable packs have also allowed Justin's to expand into non-grocery markets, including airports. Gold hopes to reach the $20 million revenue mark this year.

Despite all the success, there's one thing about Gold's life that hasn't changed. Even though he's married now, he says he and wife are content to reinvest their extra cash in the business, not in rent--so they live with roommates.