These banking entrepreneurs used greed to achieve their mission of changing the face of low-income neighborhoods. 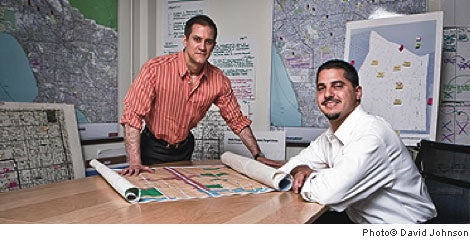 Nine years ago, Elwood Hopkins and Daniel Tellalian decided they were done with the philanthropy business. Working in Los Angeles, where they had witnessed the economic aftermath of the 1992 riots, they were determined to change the face of the city's low-income neighborhoods. Having done their time in the nonprofit sector--Hopkins was the executive director of the Los Angeles Urban Funders initiative and Tellalian was an economic development specialist--they knew that brow beating and pressure campaigns have their limitations. They weren't going to help tighten up Los Angeles' economic divide by serving meals to the homeless or starting after-school programs. Instead, they would have to turn their well-intentioned mission into a business. They would have to be greedy.

Their brainchild is called Emerging Markets Inc. Here's how it works: The Emerging Markets team combs a low-income neighborhood, searching for the kind of market information that can't be gleaned from a computer screen--information like social dynamics and community politics. Next, Hopkins and Tellalian offer their on-the-ground market research to banks as cold, hard proof that they're missing opportunities in these neighborhoods. Once the best bank sets up shop, Emerging Markets commissions local teachers, pastors, landlords--anyone who has influence in the community--to educate their neighbors on banking practices. Goodbye, check-cashing window; hello, real bank. If things go as planned, says Tellalian, it can result in "millions of dollars in new jobs and vendor spending in places where issues of perception normally scare a lot of businesses away."

It may sound like a pipedream--promoting a new bank branch and helping boost a neighborhood out of the doldrums and getting paid for it. (Even though Hopkins and Tellalian call Emerging Markets a "limited profit business," they get a yearly retainer from the banks they counsel.) But it's not a new model. There's an entire advocacy group, called Ashoka, dedicated to such conquests. And its list of social entrepreneurs, doing everything from training disadvantaged youth in high-tech jobs to offering programs designed to stop family violence, is proof of just how influential these businesses have become.

For their part, Hopkins and Tellalian are fielding requests to expand Emerging Markets' operations beyond Los Angeles to cities like Phoenix, Philadelphia and New York City. "We think we're on to something," says Tellalian. "It's just a matter of convincing potential clients that these neighborhoods are not just to be ignored or dolled out crumbs of philanthropy."