Dog collars in the vending machines? A personal trainer on a computer chip? Why didn't we think of that?

By Tracy Stapp Herold
August 21, 2009
This story appears in the September 2009 issue of Entrepreneur. Subscribe » 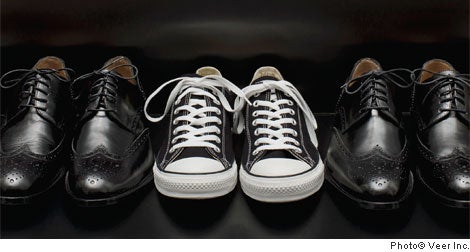 Yes, these are tough times, but you wouldn't know it by looking at these new franchisors. Although their businesses are very different--from party planning to pet supplies, home health care to personal training--each got off to a roaring start by taking a similar route. They began in a hot category (in fact, these are some of the hottest identified in our 2009 Franchise 500 issue), and then got really creative and started something no one else had before.

Here's proof that people will always pamper their pets: The American Pet Products Association estimates that Americans will spend $45.4 billion on their pets in 2009--up $2.2 billion from last year. But the recession has made it more difficult to get funding, and traditional businesses like pet shops, kennels and grooming centers can cost hundreds of thousands of dollars to get up and running.

Enter Carlotta Lennox and her Hey Buddy! Pet Supply Vending Co. Lennox's vending machines are the first to cater to pets instead of humans. The idea came to her in 1998, when she found herself in need of pet supplies while out and about with her dog but nowhere near a pet store. Over the next 10 years, Lennox pursued the idea of making it as easy for pet owners to buy water, treats, toys, brushes and even spare collars and leashes as it is to buy
a soda.

Hey Buddy! lowers the cost barrier to owning a pet-related franchise significantly: The total investment can be less than $10,000. The vending machines also don't require the same full-time attention that most other businesses do. As Lennox puts it, "While you're sleeping at night, your machine is still making money." Franchisees can even keep their full-time jobs and run their Hey Buddy! businesses part time, checking the machines on the weekend.

In fact, that's what Lennox does with her own machines in the Dallas area now that her full-time job is franchising. For her, it's all about "just being happy and knowing that I offer something that can make someone happy"--whether that something is a squeaky toy or a chance to own a business.

According to the International Health, Racquet and Sportsclub Association, there are more than 30,000 health clubs in the U.S.--a good number of which belong to one of the 19 fitness franchises listed in the 2009 Franchise 500. But all that muscle doesn't intimidate Mary Obana, president of Koko FitClub. Instead, she points out that even with all of the choices out there, only 16 percent of the population belongs to a gym.

"It's not because that other 84 percent doesn't want to be healthy," she says. "It's just that those same old solutions don't work for them." She believes that she and husband Michael Lannon have come up with something that will.

Koko's proprietary Smartraining System offers the benefits of a personal training experience without the steep cost. Each time a club member visits Koko, they insert a flash drive (called a "key") into the computer. The system keeps track of what they've done before, and how well they've done it, then guides them through a 30-minute workout customized to their current fitness level and specific goals. All the constraints of a traditional personal trainer--scheduling, expense, inconsistency and, of course, intimidation--are removed when a computer's your coach, so it's easier for members to succeed.

And when members succeed, they keep coming back for more. In fact, since the company began offering free two-week trial memberships, 100 percent of the people who've tried Koko have stayed on, Obana says.

Just as Koko FitClub's unique system draws in members, Obana hopes it will attract aspiring entrepreneurs to the franchise.

"Being different is essential," she says. "Imagine the ability to introduce something that's game-changing to the market."

The Smartraining System not only makes Koko stand out from its competitors, it also makes it easier to operate a business.

"The system is doing all of the work," she says, so each club can be staffed with just one person to sign up members and answer questions. Without the staffing costs and quality-control issues that other gyms battle, franchisees can concentrate on growing their business, and many are even opting to open multiple locations.

After a year of franchising, Obana and Lannon have sold 40 units, but Obana says that's just the beginning. "We have a $10 million investment in our technology," she says, "and we want to use that investment to build the largest fitness brand globally in seven to 10 years."

Is there a nurse in the house?

As difficult as the economic climate is, Jonathan Herman sees a silver lining for franchisors.

"A lot of people are tired of working for big corporations," he says. "They want to take control of their lives." He ought to know; he left a career on Wall Street to become CEO of Home Health Mates.

Herman's uncle, Joel Markel, spent 20 years building a home health care business up to eight locations in New Jersey and Pennsylvania. But knowing that he couldn't grow any further on his own, he brought Herman on to explore the possibility of franchising. With the U.S. Census Bureau predicting that one in five Americans will be 65 or older by 2030, there was no doubt that a business serving the elderly made sense. Of course, Markel and Herman were not the first to realize this: Senior care franchises are already plentiful; 16 were listed in the 2009 Franchise 500.

Most of those franchises focus on nonmedical companion care, and that's what sets Home Health Mates apart. Depending on the laws in their state, franchisees can also offer in-home nursing care and facility staffing for hospitals and assisted living facilities--and they can even work with Medicaid and Medicare. The diversity of services Home Health Mates provides gives franchisees "a cushion in uneven economic times," Herman says.

Leanne Pardo and Christopher Hughes left their jobs at a marketing firm in 2001 to start a party-planning business in Seattle and built it into a highly successful company. For most people, that would be enough. But they have bigger dreams: They want to build their company, One Hour Parties, into the first nationally recognized event-planning brand.

As they considered how to reach that dream, Pardo says, "of course franchising as a business model [rose] to the top." But instead of jumping into franchising, they chose to take a route less traveled. In 2006, they began offering a licensing opportunity that allowed people to use the One Hour Parties concept but run it under their own name. "People in the franchise world will of course tell you not to do that," says Pardo, but she's sure it was the right move. "When you're dealing with an industry like ours that has no established baseline . you really need to get out there and see what would make it work before you sell it to anybody."

Licensing before franchising allowed her and Hughes to confirm that there was a nationwide demand for both their services and their system, and that others could be as successful at the business as they were.

That success stems from the innovations the pair has come up with to make event planning easier and more affordable. While party planning is traditionally a consultation-style business, One Hour Parties allows customers to order "prepackaged" party services online for everything from office parties to backyard luaus to wedding receptions. This allows them to keep their prices low. "Even in a down market, people can still afford to celebrate," Hughes says.

The company's online ordering also benefits future franchisees. Many of the party products offered on the website can be ordered and delivered to areas where there's not a One Hour Parties office. So when a franchisee does enter the market, they'll have a list of customers who are already familiar with the brand before they even open their doors.

Three franchisees have done just that in the year since Pardo and Hughes began offering franchise opportunities. They have yet to reach that dream of a nationally known brand, but they're confident that they're well on their way.

"We feel like we've done all the hard work," Pardo says. "Now we're ready to party."