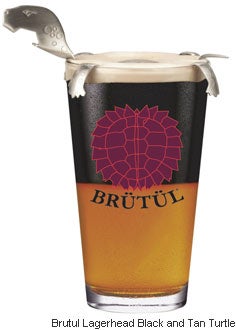 Who: Irina Cochran, co-owner of Terrapin Tool Co.
What: Brütül Lagerhead Black and Tan Turtle
Where: Jefferson, Georgia
When: 2006
Startup Costs: $50,000 for patents and engineering; $25,000 for product development

Irina Cochran and her partners spent hundreds of hours developing their product. Hundreds. Don't feel too sorry for them, though. Cochran and company were looking for a better way to pour a black and tan layered beer--a favorite libation of many beer drinkers.

For years bartenders and home connoisseurs used specialized spoons that hooked over the edge of the glass to disperse the black portion (porter or stout) of the concoction as it was poured so it would sit atop the tan layer (ale, lager or pilsner). It worked, but it lacked a certain personality. Seventy-five thousand dollars and hundreds of hours (and maybe more than a few taste tests?) later, they created the Lagerhead Black and Tan Turtle from Brütül (pronounced brew tool).

The stainless steel contraption fits over the top of a standard pint glass and leaves room around the sides for the black beer to cascade into the glass as it is poured over the turtle's back. Its mouth is a "Snapper" bottle opener, making it a full-service Chelonian.

Running a business isn't a foreign experience for Cochran. Her husband, John, and Brian Buckowski, own and operate an Athens, Georgia-based production brewery called Terrapin Beer Co. "We thought a turtle-shaped spoon that is a tool to make drinks with beer was a great idea to further promote the beer brand," she says.

But knowing it's a good idea and actually designing, creating and producing a beer tool came with its own challenges. Financing, of course, was the first. The timing was in Brütül's favor, just before the recession that locked down the credit markets, and the company scored the needed loans. The second was securing the necessary patents for the tool, a process that cannot be avoided--or hurried. The third was sourcing the product internationally.

With those issues addressed, Cochran settled into the full-time role of shipping wholesale and online retail orders and marketing the product. She concentrates her marketing efforts on gourmet food and kitchen trade shows and Irish gift trade shows--Irish stouts comprise the bulk of beers used for the black half of the signature concoction. Her efforts are paying off. She says the holiday season was busier than ever, and she's aiming high for the future.

"We would love to see [the Lagerhead Turtle] hanging in the beer aisle in every grocery store," Cochran says.