Figure out what's bugging your classmates and you just might discover a business idea.

By Joel Holland
April 15, 2010
This story appears in the May 2010 issue of Entrepreneur. Subscribe » 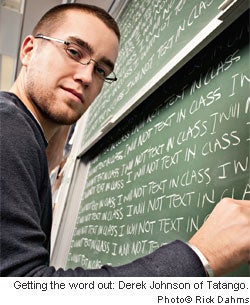 Derek Johnson was having lunch with a friend at the University of Houston when he had an "aha!" moment: The friend, a communications director for a sorority, was having a hard time messaging her chapter about important announcements, meetings and dues. Facebook, e-mail and message boards weren't working, so she asked Johnson for ideas. He thought of mass text messaging.

After doing a little research online, Johnson was surprised to find that there weren't any mass texting services for the average consumer. When a friend in a fraternity agreed that he could use such a service, Johnson decided he had a real business opportunity on his hands.