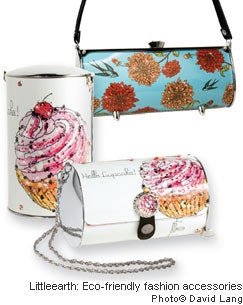 "You don't have to sacrifice to be both fashionable and green," says Ava DeMarco, co-founder and president of Pittsburgh-based Littlearth, a fashion accessory company that specializes in using recycled materials in its designs and was at the forefront of the ecofashion movement.

That thought was the inspiration behind Littlearth and its initial lines of accessories: purses made out of used license plates and belts made out of recycled leather and used bottle caps. DeMarco looks back on the early days nostalgically, remembering that the first designs were often determined by the materials she and her partner, Robert Brandegee, had access to at any given time. The first license-plate bags were wrapped around tuna cans on each end because.well.that's what they had. Those days are long gone. They now have specialized parts made for their bags and wine holders, and they work with different states to secure used plates.

One of the other challenges DeMarco recalls, something that seems silly for a 17-year-old, $6 million company that's been on Oprah and is about to buy its third building, was gaining credibility as a legitimate business out of a basement. There were times, however, when success seemed far off.

"We had some years we weren't sure we were going to make it," DeMarco says. What the company had going for it was a collection of skills many small companies can't assemble. Brandegee had an interest in fashion and possessed strong sales skills, which was instrumental at trade shows. DeMarco's background is in graphic design, so she designed strong marketing materials and products. To top it all off, Brandegee's parents owned a marketing business. Early mailers were professional looking, and their trade-show booths were always among the most popular at any show, partly due to the design and partly due to Brandegee's salesmanship and musical ability. The booth was hopping.

DeMarco and Brandegee made another crucial decision in those early days: They embraced the Internet before it was a required business tool, launching a website in 1996. "I remember having to tell people, 'Type in http://www.littlearth.com,'" DeMarco says.

Looking ahead, Littlearth has growth plans, as evidenced by its building purchase. It secured a license to create and sell NFL-themed gear under its ProFANity line, and the company is now doing drop-shipping for retailers like Ebay and Amazon. "It looks like it comes from them," DeMarco says, "but we pack and ship it."