By Mike Werling
November 2, 2010
This story appears in the September 2010 issue of Start Up.

It didn't happen the way you might think. Not when children and sharp-pointed origami paper footballs are involved. No eyes were put out or even poked--despite countless dire warnings from mothers. Spud Alford simply saw some kids playing a game he remembered playing during his own childhood--finger football--and thought there had to be a better and safer way. He invented the board version of the game in 1989, but he didn't "take it to the next level." After a brief run, it died.

For a year, Alford kept his job as an investigator for the government while working on a prototype and a business plan. "I was worn out," he says. But a well-timed $100,000 check from an investor changed everything. Alford quit his job, opened an office and pursued Zelosport and Finger Football full-time. 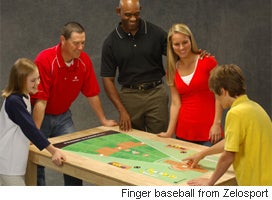 By the fall of 2006, the Columbus, Georgia-based company, with Alford as CEO and his brother, Mike, as president, was ready to kick things off. The game, with its football field configuration, mom-friendly soft football and goal posts at either end, sold 12,000 units. By comparison, Trivial Pursuit sold zero units its first--and second--year. In four years, Zelosport has moved 80,000 games through seasonal mall kiosks, 700 mom-and-pop stores, Amazon.com and other outlets. Alford knows that big-box retailers are the way to big success in the toy biz. But for now, Zelosport is sticking to its lean-and-mean strategy.

That's not to say that growth isn't part of the game plan. Tactics include an expanded lineup. The company has already added hockey, basketball, soccer, golf and baseball, which won a toy of the year award in 2007 from FamilyFun Magazine. And plans for tennis, car racing and the decathlon are in motion. Its market advance also involves the National Finger Football League, a collection of local and statewide leagues that will compete against each other for the right to face off in the national tournament in Columbus. Fourteen states have leagues, and the first national tournament is scheduled for fall 2010. And then there is personalization; the game board can be made to look like the field at any high school or college. Coors Light had the company create games for the brewer to give to its distributors.

If you don't know, finger football is played by two people using a folded triangle of paper (the football). Players flick the football across a flat surface trying to get it to stop partially over the edge. A successful try earns a player the right to turn the football on its end and flick it in the air through a goal post made by his opponent using his hands, the tips of outstretched thumbs pushed together and pinkies sticking up--think two "hang loose" gestures connected at the thumbs. The rules for scoring and game length--as well as the width of the goal posts--varied widely as young boys tried to tilt the game to their advantage. Alford standardized the rules.

So why, in a decidedly high-tech era, did launching a decidedly low-tech game strike Alford as the right thing to do? His faith played a big role, and he knew families would like a game everyone could play together. Appearances on CNN and The 700 Club didn't hurt Finger Football's prospects, either.

With sales of $1 million over a four-year span and roughly the same pace expected for 2010, about 40 college licensing agreements, an expanding roster, a growing network of competitive leagues and word-of-mouth buzz growing, it might just be time to call Zelosport and Finger Football a 20-year overnight success.