From College Students to Million-Dollar Partners

The founders of Tatto Media bootstrapped their startup and now they're running a $100 million company.

By Joel Holland
January 18, 2010
This story appears in the February 2010 issue of Entrepreneur. Subscribe » 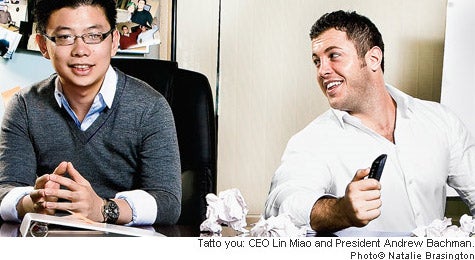 On a crisp autumn night in 2007 in Wellesley, Mass., while most Babson College students were poring over books, Lin Miao and his business partners were in their dorm pouring Dom Pï¿½rignon to celebrate their college business hitting $1 million in sales.

Less than a year earlier, Miao had partnered up with fellow Babson students Andrew Bachman, Lucas Brown and Lee Brown to build an Internet marketing company that would fundamentally change the way advertisers pay for display advertising. All four had been involved with ventures that required selling online, and each was left underwhelmed by the advertising options available to small businesses.

Charge Your Apple Watch Anywhere with This Keychain

You Don't Have to Go It Alone. It's Time to Let Go and Let Others Help.