Get a Whiff of These Walls

By Regina Schrambling
October 20, 2010
This story appears in the November 2010 issue of Entrepreneur. Subscribe » 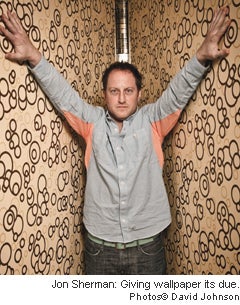 Jon Sherman's cutting-edge company, Flavor Paper, makes all of them and more. Wild patterns, intense colors and designs like the flowery/explosive Kabloom burst from the walls of his newly opened showroom in Brooklyn, N.Y., one floor up from a print studio. His windows are open to the street, so passersby can gawk at his graphic magic. "There's nothing we can't produce other than flocking," he says, and that's only because the glue's toxic.

He may sound a bit like a madman, but his work is showcased in hotels from Planet Hollywood in Las Vegas to the new W near Wall Street. These days, he collaborates with the likes of design star Jonathan Adler and does jobs ranging from an 8.5-by-11-inch framed piece to coverings for every room in the W hotel in Atlanta. He created a World Cup wallpaper with a "detailed, scrolling" pattern for Nike and also does backgrounds for photo shoots for catalogs like Banana Republic.

But how he began could be the least expected part of his story. In 2003, he was in real estate development, looking into redesigning condo interiors in Florida to push up the selling prices, when he heard of an old stock of Mylar and foil wallpaper in Oregon that looked like "pieces of art at a more affordable price." The producer refused to sell them but did want to unload his color screens and equipment--if Sherman could move them within 24 hours. Before long he had a 52-foot, 4-ton screening table installed in a warehouse in New Orleans, where Sherman was living. And from there it was DIY.

"I assumed there were books on making wallpaper," he says. "Boy, was I wrong."

Being clueless had its benefits, though: With Sherman's first line, shown at a trade fair in New York, "we got pretty lucky with the press," he says. "We didn't know the rules on color trends, like 'Mylar's out.'" Against-the-grain Flavor Paper stood out boldly.

In May, he opened the Flavor Lair in Brooklyn, a 1929 parking garage converted, for "a pretty penny," into a production studio on the ground floor, a huge showroom above and apartments for him and two employees. (The New Orleans operation will now produce Flavor Fabric.) Wall-size samples hang on huge spools in the showroom, suitable for flipping to appreciate designs that would not communicate in a mere swatch book.

Sherman's initial investment in New Orleans, $125,000, has grown into a business that produces as many as 600 rolls of custom paper a month. The prices are dear: $150 retail for 15 feet in a single color, plus $50 per screening for additional colors. A seven-color scratch-and-sniff with tutti-frutti would be $550 a roll. (Regular scratch-and-sniff comes in either cherry or banana scents.) Everything is printed to order (in two to three weeks), so there's no waste.

Scratch-and-sniff is not the most out-there wallpaper he has made; he has also produced black-light and glow-in-the-dark ones. A client once asked for a custom bondage theme. ("You'd have to try pretty hard to offend us," Sherman notes.) Bliss spas recently ordered wallpaper with a mustache pattern for its waxing rooms, while a Venezuelan casino that chose the same pattern did not realize it was facial hair.

Sherman's latest move is into digital printing so that he can do photo-mural work; now an 8-by-10 image can be blown up to 7 feet. "We want to cover all bases," he says.

Flavor Paper even hangs in the Smithsonian, in City Park pattern (think William Morris with fire hydrants), at Cooper-Hewitt, National Design Museum. Which is appropriate considering Sherman is taking his super-modern obsession way back in time, before a world where hotels used wallpaper simply to protect drywall.

"Wallpaper went from historically being the focal point in a room to being the background," he says. "I'm trying to bring it back in the foreground."