When Americans stopped buying $40,000 solar panel systems, SunRun came up with a solution: Lease them.

By Jennifer Wang
March 12, 2010
This story appears in the April 2010 issue of Entrepreneur. Subscribe » 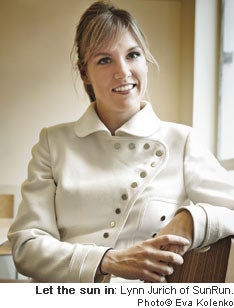 The recession marked the beginning of dark times for the solar industry.

Research firms estimated more than $12 billion in lost revenues for 2009, and they couldn't have been far off: Frozen credit, fewer subsidies and massive layoffs ended an era of free-spending, green-loving, double-digit growth.

But there are always bright spots, and San Francisco-based SunRun is one of them. Instead of trying to sell expensive solar panel systems to homeowners--systems that cost about $40,000 to install--the company leases them on long-term contracts. And in 2009, the year the rest of the industry tanked, SunRun's year-over-year growth was 400 percent.

This year, bookings are expected to triple. SunRun has expanded operations into five states in just three years, with many more territories being considered. "It's because people are more educated about solar energy, and the administration is encouraging this," says co-founder Lynn Jurich, though she notes the company isn't relying on any stimulus funding.

Here's how it works: Households pay an installation fee (no more than $1,000) and agree to a fixed monthly utility and maintenance bill for the next 20 years. Homeowners save an average of 10 percent to 20 percent off their current energy bills, effective immediately. Most break even after less than two years and save thousands of dollars over the term of the contract. Relocation isn't a problem, either. Leases are easily transferred, and most new homeowners are happy to lock in electricity costs for the near-term future. There's even an option to purchase when the contract ends.

"I'd consider it a financial no-brainer," Jurich says.

Jurich and her co-founder, Edward Fenster, met at Stanford Graduate School of Business, and they knew a good business model when they saw one--she had worked at a venture capital firm and he was in private equity. They launched SunRun in 2007 with $30 million from venture capital firms Accel Partners and Foundation Capital and managed to raise $195 million more from U.S. Bank--yes, in the middle of the recession.

Jurich says SunRun's business plan was modeled after SunEdison's, a company in Beltsville, Md., helping the commercial sector go solar by buying systems and leasing them to big-box retailers. "They were making money and had raised $60 million from Goldman Sachs. So we got started."

Although no longer small, SunRun still enters every new market as if it was a startup. "The rules aren't standard because it's a young industry, so I think of it a little like the Wild West," Jurich says. Her advice to would-be solar entrepreneurs? "Don't underestimate the regulatory challenges," she says. "You have to educate everyone so they know it's a public good. Build relations with politicians, commissioners and utility companies, because you don't want someone to come in later and say you're doing things wrong."