On the Itinerary: Your Future

Study abroad, and find the business opportunity of a lifetime.

By Joel Holland
September 16, 2009
This story appears in the October 2009 issue of Entrepreneur. Subscribe » 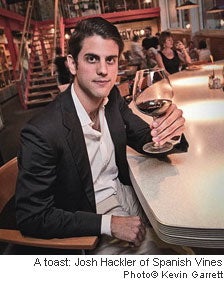 Josh Hackler wanted to experience the real Spain--to live in a small town with a rich history and immerse himself in the language and culture. So, in 2005, he signed up for a study-abroad program through the University of South Carolina and headed to Oviedo, near Spain's northern coast.

By day he studied the language and soaked in the Romanesque architecture; by night, he explored the town's wine bars and got to know the local Spanish juice.

"I started talking to the waiters about their wines and the wine regions," says Hackler, now 24. "It turned into an obsession."

It never occurred to him it could also turn into a business, until Christmas approached and his roommate sent a few bottles home as gifts. "You can buy an incredible bottle of Reserva in Spain for less than 3 euros," Hackler says. "So I figured, why not send a little bit more back and sell the rest?"

Hackler asked his father to visit a few grocery stores to see what kind of presence Spanish wines had. "It was very small, barely in existence," he reported. And so, in between studying and exploring, Hackler began mapping out his concept for Spanish Vines, a company that would import and distribute affordable wines from Spain. While Spanish wines were still making inroads in the U.S., the wine market itself was oversaturated with distributors. How to compete?