Matt Moman had fake limes, actual beer and a flash of inspiration.

By Jennifer Wang
April 15, 2010
This story appears in the May 2010 issue of Entrepreneur. Subscribe » 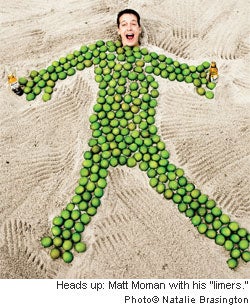 What entrepreneur hasn't fantasized about the million-dollar idea that's right under his nose?

Well, meet Matt Moman, the man who turned a piece of plastic fruit into a multimillion-dollar licensing deal with Grupo Modelo, the behemoth behind the Corona Extra beer brand. How did he do it? Says Moman, "I always start with what I know."

As owner of Moman Sales, a South Florida specialist in plastic flowers, what he knows is fake flora. In June 2007, Moman was on a business trip to San Francisco, checking out the latest in nature's plastics, when he hit on the citrus creations of Winward International. The lemons and limes looked and felt so real, Moman was convinced there had to be another way to market them.

A few days later, back home sipping a beer, it came to him: The limes would be a perfect match for the Corona brand.

Enter "the limer," or as it is officially known, the New Corona Extra Lime Bottle Opener. It's a simple gizmo: a bottle opener embedded in a plastic lime, with a built-in magnet made for sticking to the fridge. Yet, it's irresistible--it cups perfectly in the palm of your hand, it effortlessly pops the cap and, with a little practice, you can even catch the cap on the magnet.

Moman began making crude prototypes in his garage, then asked Winward, of Union City, Calif., to help with the project. "We went back and forth and determined what we wanted, and I went ahead and filed for a patent," he says.

By summer of 2008, he was ready to pitch Corona, with nothing more than a pre-production sample and his pending patent. "Fortunately," Moman says, "once they saw it, they totally got it." Seven months after he filed his patent, he got his contract, which is expected to net him millions.

"The lime opener has proven to be a fantastic addition to our line of promotional and novelty products," says James Valles, national project manager of Grupo Modelo. "Sales of the lime opener have doubled within the grocery channel over the last few months with no signs of letting up."

Indeed, last October's initial production of 5,100 limers sold out quickly. Tens of thousands more have been ordered to be sold online at store.corona.com, as well as in supermarkets and drugstores by Memorial Day weekend.

"The expectation is that we can sell a quarter of a million units this year, at $7.99 each," Moman says. "That makes about $2 million in retail sales, and as long as we avoid the fad factor, this product is here to stay."

Talk about low-hanging fruit. But Moman isn't kicking back yet. "I'm passionate about making this as lifelike as possible," he says. "It's my business, after all."

Indeed, the second-generation limers will have more give, mimicking the feel of ripe fruit. And after that, he's thinking about adding a lime scent.