Shopping Gets Even More Social

By Jason Ankeny
February 16, 2010
This story appears in the March 2010 issue of Entrepreneur. Subscribe » 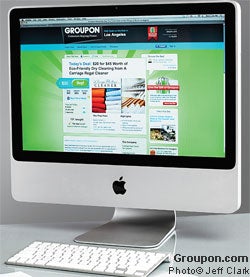 Groupon transforms the art of the deal into a truly collaborative effort. The premise behind the social commerce site is simple yet ingenious: Each day, Groupon.com presents an irresistible bargain from a local retailer or restaurant, with just one catch--the offer is good only if a predetermined number of consumers take advantage within a 24-hour period. If the user minimum is met, everyone who signed up is charged for their purchase and mailed a link to print their Groupon to be redeemed; if not, the deal is canceled.

"We tell the businesses we work with, 'Make this the best deal you've ever run,'" says founder and CEO Andrew Mason. "We want consumers to feel like if it's offered on Groupon, it's the best deal available."

The Chicago startup also encourages bargains that promote social interaction among users, such as dining opportunities, spa treatments, even extreme sports--a Groupon offering a $100 discount on tandem skydiving jumps was an enormous success for partner Chicagoland Skydiving Center in August. "We sold over 1,600 skydiving packages," Mason says. "In one day, we equaled a quarter of the number of skydiving lessons they sell in an average year."

Groupon gets paid roughly half of each deal it sells--as of late 2009, consumers purchased more than 1.1 million Groupons, translating to a combined savings of more than $58 million. Groupon now reaches about 2 million subscribers across 28 U.S. markets and adds about 200,000 new customers and one new market each week. In December, the firm closed a second round of institutional financing valued at $30 million.

Deal
Groupon's raison d'�tre, identifying the day's offer, cash value, percentage discount and cost savings, as well as highlights of the featured business and customer restrictions. When the buyer minimum is reached, Groupon lets users know the deal is on--and for shoppers still on the fence, it lets them know how much longer they have.

Description
Because so many of Groupon's partners are small, fledgling businesses unknown to many consumers, the site includes a more detailed account of the advertiser's selling points, complete with contact information, a website link and a connection to Google Maps.

Discuss
A lively user forum dissects both the quality of the offer and the local business it promotes. Groupon users are by nature social butterflies, and they're not shy about sharing their opinion on that day's deal--positive or negative.

Disseminate
Users can read tweets from Twitter users in their area as well as connect to Twitter, Facebook and e-mail, fostering the social interaction central to the Groupon ethos. (The firm is an extension of The Point, a collective action platform founded by Mason in late 2007.)