Solo, But Not Alone

A new generation of entrepreneurs is congregating in 'co-working' spaces across the country.

By David Port
September 17, 2009
This story appears in the October 2009 issue of Entrepreneur. Subscribe » 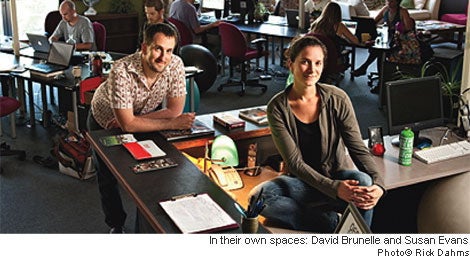 David Brunelle was living the dream: He'd shucked his 9-to-5 office job, liberated himself from the cubicle farm and started his own business. He was working from home, being his own boss . and before long, wallowing in freedom.

"More often than not, I'd find myself on the couch, playing Xbox at 1 in the afternoon," says Brunelle, a Seattle web developer. "It became pretty clear that to be productive, I needed structure, I needed to set boundaries between my work and my home life, and I needed to be around other people who are serious about their work."