By Jennifer Wang
July 16, 2010
This story appears in the August 2010 issue of Entrepreneur. Subscribe » 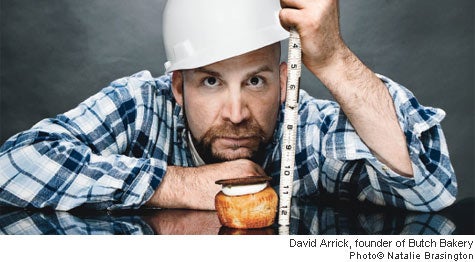 Idea: Cupcakes for men. "We stay away from pastels and sprinkles," Arrick says. Hence the "Driller," a maple cupcake smothered with crumbled bacon and chocolate ganache; the "B-52," a Kahlua-soaked cupcake sporting a camouflage topping and the "Beer Run," a chocolate-beer cupcake with beer-infused buttercream and crushed pretzel sprinkles. Can't decide? The "Butch Box" holds all 12 flavors for $48, plus $8 delivery.

"Aha" Moment: Walking past the long line of people waiting for frilly cupcakes at Magnolia Bakery in Manhattan, the cupcake craze's ground zero. Two thoughts ran through Arrick's head: "I gotta get on that bandwagon" and "Where's the boy bakery?"

StartUp: Arrick cashed out his 401(k) and ran up credit cards to the tune of $25,000. He worked with bakers and consultants to create recipes and focused on building a strong online presence. "It's the biggest risk I've ever taken, but I've reached an age where the worst that could happen doesn't sound that scary."

Customers: 90 percent women. "I've tapped into the 'What do you get for a guy?' market."