The Likes of You

GetGlue recommends movies, music and books based on what already floats your boat.

By Jason Ankeny
July 19, 2010
This story appears in the August 2010 issue of Entrepreneur. Subscribe » 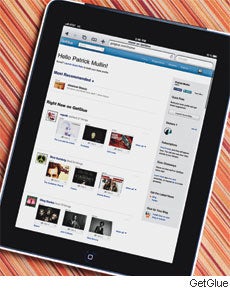 Play favorites
GetGlueis a free social recommendation engine spanning pop culture pillars such as movies, TV shows, books and music. After signing up, consumers click on their interests, building a profile that GetGlue matches with personalized faves and raves from more than 500,000 registered users. Suggestions also integrate contextual content from resources including Amazon, IMDb and Wikipedia, and extend across Facebook and Twitter. "We started with the notion that the old web is about websites and pages, and the new web is about connecting people and the things they care about," says Alex Iskold, CEO of GetGlue parent firm AdaptiveBlue in New York. "Once you tell the site what you like, it connects you with other stuff you might be interested in and people who like the same stuff."

Earn rewards
The more time and energy put into GetGlue, the more valuable the service becomes. Once a user amasses seven virtual stickers--given out in recognition of deeper interaction with the site--GetGlue mails out adhesive badges to further bolster user loyalty. GetGlue users also can share their knowledge and passion with other members, even earning recognition as a Guru. There's only one Guru per subject, so competition can be fierce. "Gurus are pivotal to the site," Iskold says. "American Beauty is my favorite movie. If somebody takes the [American Beauty] Guru title away from me, I'm highly pissed off." Gurus also expand GetGlue's recommendations beyond algorithms: "The system is designed to turn Gurus into site editors," Iskold says.

Reach consumers
GetGlue also offers publishers, film studios and other media providers a direct channel to consumers seeking new entertainment options. Universal Pictures, Random House and Simon & Schuster are just three brands that have signed up for Guru Giveaways, offering free movie passes and books to GetGlue Gurus. (Iskold says he can't disclose GetGlue's revenue model but says that Guru Giveaways is one way the site generates revenue.) "This is the age of bite-sized reviews--people want simple suggestions, with information from friends they trust," Iskold says. "We've built a very lightweight, vertical social network that can become useful for everybody."