The votes are in--now it's time to meet the top entrepreneurs and learn their secrets to success.

By Jennifer Wang December 16, 2009
This story appears in the January 2010 issue of Entrepreneur. Subscribe »

It started back in March, when thousands of you entered our Entrepreneur of 2009 competition. We scrutinized the applications, reviewed the financials and winnowed the field down to 15 finalists. Then we turned it over to you, our readers.

You went to our website, watched the videos and cast your votes. And now, the results are in: Here are the winners of the Entrepreneur of 2009 awards.

There's Rick Alden, the Park City, Utah, founder of Skullcandy, maker of seriously rad headphones and the Entrepreneur of 2009. Kelly Giard, the Emerging Entrepreneur of 2009 from Fort Collins, Colo., is conquering pollution one franchise at a time with his sustainable lawn-care business. And, for the first time, we have a top College Entrepreneur: Bradley Ericson of Philadelphia, who at 19 is in the midst of implementing a digital receipt system for his first client.

It was an impressive group. Our panel of judges--Entrepreneur editor-in-chief Amy Cosper, The UPS Store vice president of worldwide sales and marketing Tom Crockett, entrepreneurial center director George T. Solomon of George Washington University, Entrepreneur's vice president of marketing Lisa Murray and The UPS Store spokeswoman Rebecca Andrews--noted that recession be damned, these were entrepreneurs with high aspirations and business plans built for a down economy. The vast majority were bootstrappers with sustainable financial models and a scrappy attitude:

Just what it will take to pull the economy up and into the next decade. 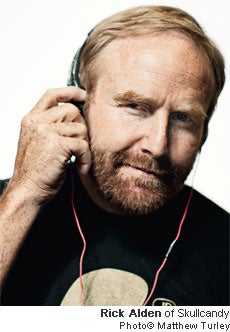 Can't do without: The Skullcandy team. "Getting the right crew is the secret to our success."

Thoughts on entrepreneurship: "It's the truest way for an individual to express creativity in the world."

Inspiration hit Rick Alden on a chairlift, during a snowboarding trip in 2001. The iPod had just been introduced, but none of the headphones were designed to appeal to the iPod-toting action-sports crowd. It was time to change the game.

An experienced entrepreneur--Alden founded Device Manufacturing in 1995 and sold it to Atomic ski company in 1999--he got to work immediately and designed headphones and earbuds in bright colors and skater-boy patterns. He came up with a cool name--Skullcandy--and proceeded to take out two mortgages on the house he'd already paid off.

Alden says his wife made it an easy leap: "Her response was, 'Listen, the worst thing that could possibly happen is the business fails, and we start all over again. That's just not that bad.' "

Skullcandy launched in 2003. The demand was immediate, but the production? Not so much. Factories weren't willing to take risks on a newcomer. "The first year, we had to pay 100 percent of our costs upfront," he says. Things got easier after that, and Alden, now 45, is riding high. 2008 revenue topped $86 million, and 2009 was expected to reach $120 million.

And there's no sign of losing steam: When the downturn affected orders from retailers, Alden focused on attracting new customers in the wireless realm. "We're in all AT&T stores now," he says, noting that an agreement with T-Mobile is forthcoming.

But he's not done yet. Alden--whom we caught up with between riding waves in Fiji--recently launched 2XL, a line of high-end headphones. And he's looking at several new businesses for the coming year. "We're hopeful that when the economy recovers, it will cause all ships to rise equally. And we'll have a lot of new ships." 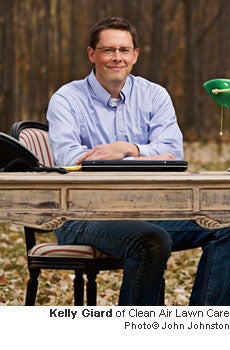 Entrepreneurial idols: His grandfather--"He raised himself up from nothing and ended up with a big apple farm"--and Yvon Chouinard, founder of Patagonia.

Can't do without: Good online hires.

Ask Kelly Giard, founder and CEO of Clean Air Lawn Care , how he turned a part-time project into the nation's first sustainable lawn-care franchise, and he'll tell you it had a lot to do with timing: "We landed on the front end of the green movement, and it immediately took off."

The idea of tending lawns with organic soil treatment and quiet electric-powered equipment struck a chord with people in his hometown, Fort Collins, Colo., and soon after, points beyond. "At least 5 percent of pollution is caused by gas-powered maintenance equipment," Giard says, "even though this is one of the last dirty frontiers in America that can be easily solved. I think people are seeing that."

Sales multiplied from just $7,000 in 2006 to more than half a million dollars in 2008. The company now boasts 18 locations in 32 territories. And while franchise sales overall are declining, Clean Air Lawn Care's growth has kept pace with previous years. Giard is aiming at 500 locations in the next decade and expects royalty fees to double for at least the next five years.

"I started this up in my garage for fun mostly," says Giard, 38, who owned a stock brockerage franchise at the time, "and because I was looking for something with potential to operate on a larger scale."

He is also pushing for improvements in electric mowers and trimmers, which generally don't perform as well as gas models. Clean Air is partnering with Black & Decker to manufacture electric equipment that will be on par with gas. "This is critical to us doing well in the long term," Giard says, "so that Joe American has a choice between two products that can get the job done." 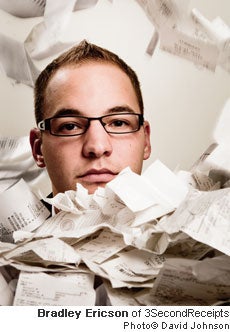 Entrepreneurial idol: His brother Timothy. "He runs his own business and always seems to have an answer."

Source of inspiration: A Henry David Thoreau quote, told to him by his grandmother: "Go confidently in the direction of your dreams. Live the life you've imagined."

Can't do without: Drexel University resources.

Bradley Ericson, a sophomore at Drexel University's LeBow College of Business, has a resume that trounces that of the typical midcareer executive. He's a brand specialist at Johnson & Johnson, marketing director of Webergize, vice president of marketing at 11 Trees and co-founder and CEO of 3SecondReceipts , his official entrepreneurial pursuit.

All this while going to school. And 3SecondReceipts has already landed its first client--Drexel University--just a few months after launching.

The idea came to Ericson when he noticed the appalling amount of waste generated from paper receipts on campus. "The average lifespan of a receipt is three seconds, so I wanted to find a way to digitize them." His system is aimed at universities (for now) and will link transactions to a student's ID card, itemize the data and store them on the school server for students to access and download.

Things are going swimmingly. "I hope to get a system up and running in the next three to four months, and then expand quickly to other Philly schools," Ericson says. Revenue could be as much as $50,000 this first year, and by next, perhaps quadruple that. In 2011, growth could be "exponential." After that? His sights are set on partnering with a credit card, bank or major company to break into the retail market.

"The original plan was to be the one guy to tackle major retailers like Wal-Mart and say, 'Hey, use my system,'" Ericson says. "But there are so many barriers to entry, and retailers don't want an unproven 19-year-old kid to deal with that." His solution: Talking to companies like Mint.com, which is waiting for him to succeed in the university market before possibly partnering to take it to the next level.

Based on this past year, it shouldn't take long.