Making honey becomes a big business for teenage sisters -- and a big benefit for cancer research.
Next Article 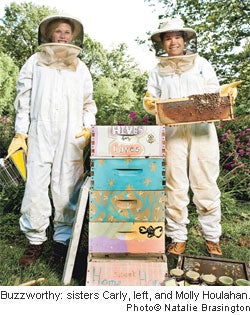 When their grandfather died of esophageal cancer in 2003, sisters Molly and Carly Houlahan wanted to do something significant that would both honor his memory and help fund the search for a cancer cure.

"He was our best friend and role model," Molly says. "It was the first time we had lost someone, and you recognize how precious life is."

So Molly, now 18, and Carly, 16, put a family hobby to work and formed Hives for Lives. The Devon, Penn.-based company harvests, filters, bottles, labels and sells its own honey, and all profits are donated to fund cancer research.

At first, the duo sold at crafts fairs and horse shows. But eventually, they expanded to local bakeries and kitchen stores and added beeswax candles to their product line. Soon the local Whole Foods asked them to sell at the store's Sunday farmer's market. Their products ended up on the shelves of one Whole Foods store after another until Hives for Lives could be found across nine of the company's 11 U.S. market regions. They also take orders for all their products on their website, hivesforlives.com.

As business exploded, Hives for Lives still had only 23 beehives and was having trouble keeping up with demand. That's when the Houlahans brought in the big guns and partnered with market leader Dutch Gold Honey in Lancaster, Penn. Hives for Lives now supplements its own local honey sources with honey purchased from Dutch Gold and sells its 12-ounce jars for about $7 apiece.

The Houlahans have received numerous awards and honors for their efforts, including the 2007 middle school and high school Prudential Spirit of the Community awards as the top youth volunteers in Pennsylvania, and the President's Volunteer Service Award from former President George W. Bush. The American Cancer Society honored them with its Project Award, and they received the Gloria Barron Prize for Young Heroes for their contributions.

To date, Hives for Lives has donated nearly $170,000 to the Sloan-Kettering Cancer Center, the Penn Abramson Cancer Center and other cancer research charities. That's largely because no one at the company draws a salary. The Houlahans devote evenings and weekends to their business, which also has a network of volunteer "helper bees" who donate their time either for the experience or because they have a personal connection to the disease and want to support the cause.

Molly, who is a freshman at Yale University, says they'd like to keep the company "run by kids," even though they're not yet sure how to do it.

"I can hold down the fort until I go to college," Carly adds. "But we're looking for ways to pass this along to the next generation. It's not as impactful if a 30-year-old is running the company than if kids are doing it."