Blank Label founders Fan Bi and Danny Wong have made more than $350,000 in their first year.
Next Article 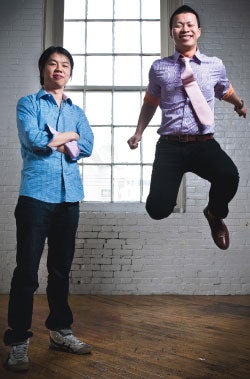 For thousands of Shanghai residents, shopping the city's fabric markets represents little more than an errand. But for Fan Bi, a 23-year-old native of Sydney, Australia, a visit during the summer of 2008 represented both a consumer epiphany and an entrepreneurial milestone.

The founder and "chief shirt" of apparel company Blank Label was vacationing between semesters at the University of New South Wales when he first discovered the vast difference between shopping by size for a pre-made garment and shopping by fabric for a custom-made garment.

"I used to buy dress shirts off the rack in Sydney," Bi says. "But this idea of going to a fabric market, being measured, being able to choose different fabrics … I thought, 'Wow, you know, this is a really different experience.'"

Not only was it a superior experience and product, Bi says, but it was also far less expensive than purchasing shirts of similar quality in stores--an advantage that led him to consider college students, a demographic urgently in need of dress shirts and suits upon graduation, but just as desperately in need of savings.

Bi's idea for a new customized apparel company was well timed--it corresponded with a trip to study abroad at Babson College in Wellesley, Mass., just a few months later. Faculty helped Bi hone his idea, and he recruited campus sales reps. What he needed, though, was a polished e-commerce approach.

That's when he got a call from Danny Wong, Blank Label's 19-year-old co-founder. Wong saw one of Bi's job postings for campus reps and was interested in the Blank Label concept, but he thought he had more to offer with his knowledge of online operations.

Then a student at Bentley University in Waltham, Mass., Wong initiated what would become both a partnership and a massive company pivot by posing a single question: "What's your SEO strategy?" It wasn't long before Bi and Wong joined forces to leverage the global power of the web and teamed up with a West Coast partner and programmer. By the end of 2009, they had launched the Blank Label website.

"We want to be the destination where people can come and design their own apparel," Bi says. "You see a dress shirt on the left-hand side and then style options on the right-hand side." Indeed, online visitors can build a custom shirt by selecting a fabric, color combination and style of cuff, collar, placket, pocket, button, monogram, even custom label--all for less than $50.

Since the site's launch, customers worldwide have ordered more than 7,000 shirts, generating over $350,000 in revenue. And the web-oriented founders have managed almost the entire process remotely. "Thanks to the Internet," Bi says, "you can work with the best people in the world, not just the best people in your neighborhood."

6 Things Every New Consultant Should Know