The best artists in the business want to lay down their tracks at Allen Sides' Ocean Way Recording. Now he's taking his state-of-the-art studio expertise to them.
Next Article
Jason Daley
Magazine Contributor
April 26, 2011 4 min read

Allen Sides has had the entrepreneurial bug since he was a kid in the late 1960s, installing hi-fi equipment around Los Angeles and building elaborate custom speakers. Decades later, Sides is one of the world's premier sound engineers. His Ocean Way Recording in Hollywood recently renovated its Studio B, where he has recorded more than 500 albums, including Michael Jackson's Thriller and works by Eric Clapton, Green Day and Beck.

"I built my first studio in a garage to sell my custom speakers," Sides says. "But people got interested in my recordings, so I shifted gears and I was in the studio business."

"You never want to play on a level playing field," Sides says. "What we have is unique. It's an astonishing collection of things you just can't get anywhere else."

Even as Ocean Way continues to bolster its rep as a global destination studio, Sides is taking his expertise on the road, setting up temporary studios in locations around the world. His Ocean Way To-Go business has built studios in Ry Cooder's garage, outfitted a house to record the latest Radiohead album and even set up a studio for Phil Collins in a Swiss castle. The studios, which typically operate from two weeks to six months, are more cost-effective than renting studio time and let artists record whenever they feel like it. 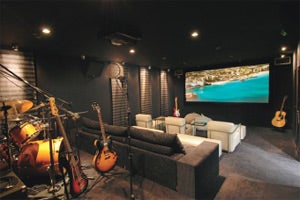 Villa Rockstar at the Eden Rock Resort on St. Barths.

Innovation abounds in all of Sides' efforts: His company rents out some of its hard-to-find equipment to other studios and artists. It's also one of the few places that can repair classic consoles and speakers, which are sent in from around the world. Sides recently released a library of drum sounds from 50 different kits that has already become the industry standard. He also added a film-audio mixing console at his Record One studio in Sherman Oaks, Calif.--one of just four in the area, and the only one not affiliated with a major studio. And in 2009 he opened Villa Rockstar at the Eden Rock resort on St. Barths, a 16,000-square-foot hideaway and recording space that caters to the world's elite artists.

But the thing that gets him most excited is the same thing that got him into the audio business in the first place: building custom high-end speakers. Ocean Way Audio builds high-tech monitor speakers that are distributed by Guitar Center Pro in the U.S. and exported to Europe and Asia (it also recently branched out into installing high-end custom home theater and audio systems all over the world). It's a lot to manage, but all of his projects fuel Sides' passion for quality sound.

"When someone listens to a speaker and they're speechless, I'm a happy guy," he says. "When a musician walks into one of my studios, I want them to say ‘That's ridiculous.' That's what makes my day."