Paperfeet is building an eco-friendly business out of discarded billboard materials.
Next Article

Jimmy Tomczak didn't like to don clunky shoes or sandals for his walks to the lake. He enjoyed barefooting the trip--but his gravel driveway wasn't exactly flesh-friendly. Though he was attracted to minimalist footwear like Vibram's FiveFingers line (glove-like shoes that simulate the barefoot experience), the hundred bucks a pair price tag was too high for the University of Michigan student's budget.

So Tomczak began fashioning homemade sandals from things he found around the house. An eBay seller, he tried using a Tyvek FedEx envelope for an early model. Though the shoe was lightweight, it didn't offer much sole protection.

Tomczak continued his quest to create an inexpensive, light shoe. Still in school and supporting himself through odd jobs, he stumbled onto his shoe material of choice while working a roof repair job. A contractor acquaintance suggested that instead of laying down $200 to $300 for a tarp, Tomczak contact local billboard advertising companies and ask them for their leftover vinyl. He did, and scored a McDonald's sweet tea billboard for $20.

"When I took the vinyl down [after finishing the roofing job], it was still good--and that was after six months flopping around in a Michigan winter," he says. "I realized that material was exactly what I was looking for." The eco-bonus: Repurposing used or discarded billboard vinyl keeps the material out of landfills. 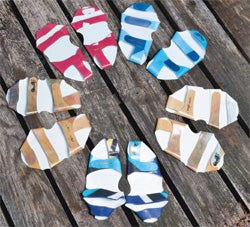 Hobbled by his inexperience in cobbling, Tomczak created 20 shoe models--including one that didn't even make it down the driveway--on his way to a final product. Finally, he experimented with Velcro and came up with a flat, die-cut design.

He launched an early version of his website in 2009--and his company, Tombolo, in late 2010. Meanwhile, he researched his potential customer base and was selling a beta version of his model by June 2010. Tomczak also applied to Sparkseed, a San Francisco-based nonprofit that offers seed funding, mentorship and other resources to socially conscious entrepreneurs. In April 2010, Tomczak--at the age of 21--was named a Sparkseed innovator. Just two months later, he launched a revamped version of his website.

The inspiration for the paperfeet brand, Tombolo's main product line, came from that early Tyvek-envelope shoe experience. "Someone asked me, 'Hey, what are you doing with paper on your feet?'" Tomczak says.

At first, Tomczak sold the shoes at cost. He also experimented with letting people name their own price to see what his customers were willing to pay. (The answer: between $5 and $30 a pair.) Since then, Tomczak has developed several different versions of the sandal, including one with a heftier sole. Prices range from $19.99 to $39.99, plus shipping. Paperfeet sandals are made in Michigan using what the company's website calls "local ethical labor."

Tomczak anticipates summer sales of 1,000 pairs per month. He's also had interest from boutique retailers and is pursuing spring break 2012 promotions with various brands, pitching paperfeet as a giveaway with purchase. The idea has come a long way since those first FedEx envelopes, and Tomczak still has a bit of marvel in his voice when he talks about his accomplishments.

"It's not like I woke up one day and said, 'Oh, I'm going to make shoes out of billboards," he says. "It was an evolution from an idea to a good product that helps the environment."